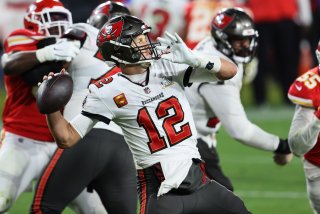 Back in March, The Athletic reported that the NFL was considering launching its own streaming service, possibly to be called NFL Plus. According to a briefing delivered to NFL owners at a meeting that month, the proposed service “would include games, radio, podcasts, and team content.”

Now, it appears that the NFL is going ahead with the NFL Plus idea.

Sports Business Journal reported from the latest NFL owners' meetings on Wednesday that the service will launch in July, with a focus on mobile devices.

“Live games on mobile phones and tablets will be the content centerpiece of NFL Plus, which will sell for about $5 monthly, though a source cautioned the pricing structure may change,” the report said. “It will likely include other content as well; possibilities include radio, podcasts, and miscellaneous team-created content.”

Fans, however, won’t be able to get every live game, but rather only those available in the market where they are watching the game. That access was until recently provided by Yahoo, but the NFL has decided to keep those rights in-house, with a paid streaming service. It’s not clear if subscribers to NFL Plus will be able to get the service on their TVs or streaming media players, a move that would appeal to cord-cutters who wish to watch the NFL.

As pointed out by Pro Football Talk, the NFL unsuccessfully tried launching a service called NFL Now around 2013.

The deal represents the latest in a re-ordering of the NFL’s streaming rights. The league, when it agreed to its latest TV deals last year, added game streams on Peacock, Paramount+, and ESPN+, while giving Amazon Prime Video the exclusive rights to Thursday Night Football. Amazon went on to hire legendary broadcaster Al Michaels to announce those games.

The NFL is also preparing to find a new rights partner for its out-of-market NFL Sunday Ticket package, which has been exclusive to DirecTV since it first launched in 1994. The league is known to be pursuing a streaming partner for that package, with Apple considered the favorite. However, nothing has been announced, and DirecTV still has one more year remaining on its deal with the NFL.

Axios, citing data from SNL Kagan, reported earlier this spring that about 23 percent of DirecTV’s subscribers paid for Sunday Ticket during the last NFL season. Of those surveyed, 54 percent do not subscribe to Sunday Ticket, 23 percent do subscribe, and 16 percent got the service as a “new subscriber perk.”