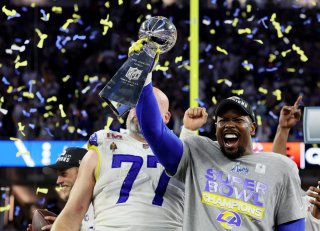 Even before the start of the 2021 National Football League (NFL) season, which ended Sunday with the Los Angeles Rams’ victory in Super Bowl LVI, there has been speculation about what the NFL might do with the rights to NFL Sunday Ticket. The out-of-market games package has been exclusive to DirecTV ever since it launched in 1994, but Commissioner Roger Goodell and the NFL owners have made it clear that they would like Sunday Ticket to continue with an online-focused partner rather than the current satellite service. The DirecTV deal is set to expire after next season.

The 2021 season ended without any resolution in the status of Sunday Ticket, although various reports the week of the Super Bowl indicated that the league is now turning its attention to that issue.

NFL chief media and business officer Brian Rolapp, according to Pro Football Talk, appeared on CNBC during Super Bowl week and stated that the league is having “lots of conversations'' about Sunday Ticket, that those talks have taken place with “traditional companies and tech companies,” and that the potential deal in question has to do with other topics as well as Sunday Ticket. That presumably is a reference to the league’s plans to sell a stake in its media arm.

The “traditional” companies are presumably the league’s primary existing media partners—Comcast/NBC, Disney/ABC, and Fox—all of which have been mentioned as possible destinations for the package. There have also been reports that DirecTV could retain the satellite side of the partnership. The “tech companies” are likely Amazon and Apple. As the new home of Thursday Night Football, Amazon is already in business with the NFL, and Apple is reportedly interested in bidding on a package of Major League Baseball broadcasts.

“We’re looking for strategic partners for our owned and operated assets, which include the NFL Network and the Red Zone Channel,” Rolapp said. “We’re talking about some pretty interesting partnerships with NFL Films so we can increase the NFL Films presence on streaming platforms.”

Disney’s CEO has confirmed that the company is bidding for Sunday Ticket.

The New York Post reported at the end of January that Apple is in “strike mode” when it comes to the Sunday Ticket bidding.

If Sunday Ticket becomes a streaming product, it would likely be integrated into existing streaming services offered by the companies. For example, NFL games could appear on Apple TV+, Amazon Prime Video, NBC’s Peacock, and either Hulu or Disney+ for Disney. Streams on Disney services would presumably carry some ESPN branding. It’s also possible that the companies could offer standalone apps.

A report in the Athletic last September named Apple as the favorite, although other reporting has placed different companies in the lead at different times in the past. That report also stated that the NFL is considering innovations like the ability to subscribe to the out-of-market games of one particular team or even individual games.

Also in September, CNBC reported that Amazon was “in talks” related to the package and could pay as much as $2.5 billion per year, although most other reporting has not listed a dollar figure for the potential package. That report also stated that NBCUniversal, the owner of Peacock, is unlikely to be a major factor in the bidding.

But What About DirecTV?

Some reporting has also indicated that DirecTV could stay on as the satellite provider for Sunday Ticket, which could help the satellite company keep some customers it would otherwise lose. For years, many restaurants and bars have offered Sunday Ticket to bring customers in to watch the games on Sundays. But it’s not clear what form DirecTV will even have taken by the time the new Sunday Ticket contract goes into effect in 2023.

The company, which was spun off by AT&T into a separate company in 2021, is once again in merger talks with satellite rival Dish Network, the New York Post reported. However, there has not been much news about the potential merger in the month since.

DirecTV and Dish Network have come close to merging multiple times over the years, including an agreement that was reached in the early 2000s before it fell apart over antitrust concerns. Those concerns were raised again when AT&T put DirecTV on the auction block in 2020, but the Post reported that they may not be as much of an issue this time.