The NGAD Program Will Integrate Manned and Unmanned Systems 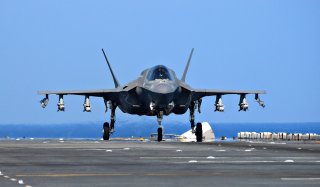 The U.S. Air Force’s sixth-generation stealth fighter will operate as part of an integrated Next Generation Air Dominance (NGAD) “system of systems.” This system of systems will include unmanned drones, manned jets, and a new generation of networking technologies.

“NGAD must be more than just the next crewed fighter jet. It’s a program that will include a crewed platform teamed with much less expensive autonomous un-crewed combat aircraft, employing a distributed, tailorable mix of sensors, weapons, and other mission equipment operating as a team or formation,” Air Force Secretary Frank Kendall explained.

Kendall described this in terms of defining a “system of systems” concept for the NGAD platform. The Air Force has shown that advanced AI-enabled computer algorithms are capable of processing information in milliseconds, making decisions, and performing quite well in dog fights. However, human faculties are best suited for more subjective variables, including emotion, intuition, and assessing a variety of factors in relation to one another.

At the same time, procedural functions like data processing, finding moments of relevance from hours of raw incoming information, and computational assessments can all be done in milliseconds by a computer. Therefore, many Air Force developers believe that the service should optimize the best of both manned and unmanned systems by operating them in a coordinated and networked capacity. This approach can be seen in the Air Force’s successful efforts to fly manned jets with an unmanned, AI-capable co-pilot.

This focus on synergy and combining the unique attributes of human pilots and drones appears to encompass much of Kendall’s objectives for the sixth-generation platform. Kendall also noted that part of the equation is the added benefit of cost savings, as unmanned systems do not need to be built with as many protections

“We’re looking for systems that cost nominally on the order of at least half as much as the manned systems that we're talking about for both NGAD and for B-21,” Kendall said. And while the savings are important, Kendall noted that these unmanned systems allow the Air Force to do things it “would never do with a crewed platform.”

The Air Force has already made breakthrough progress in its efforts to operate a “loyal wingman” drone alongside a manned fighter jet. This greatly reduces latency by removing the need to send information through a ground control station and enables manned crews to operate the sensor payload and flight path of a nearby unmanned system.