Nikki Haley: 'Hard to See Where Impeachment Would Qualify' 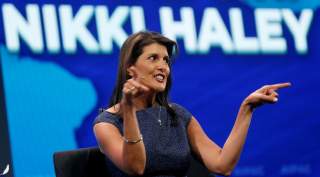 Former U.S. ambassador to the U.N. Nikki Haley backed up President Donald Trump on impeachment, his character and the Ukraine phone call during an interview with NBC’s Savannah Guthrie on Tuesday morning.

Haley defended the president’s phone call with Ukraine, a move that has since sparked an impeachment inquiry, telling Guthrie that it is not an impeachable offense during Tuesday’s show “Today.” She admitted that asking Ukraine to look into former Vice President Joe Biden was not “good practice,” but insisted that there were no demands and no indication that aid would be withheld if Ukrainian President Volodymyr Zelensky didn’t listen to Trump.

“I think it’s never a good practice for us to ask a foreign country to investigate an American,” Haley said. “It’s just not a good practice. Having said that, there’s no insistence on that call. There are no demands on that call. It is a conversation between two presidents that’s casual in nature, and you know, it’s just hard to find anywhere that the president of Ukraine would have thought funds were being held and that he had to do this.”

Haley also noted that impeachment is “the most serious thing you can do to a president” and suggested the people should decide on whether the offense was as bad as it is being made out to be. She added that the aid was given to Ukraine and the situation makes it “hard to see where impeachment would qualify.”

“Impeachment is literally the worst punishment you can do to a public official, and here you’ve got a situation where there was no investigation, and the aid flowed as it was supposed to,” Haley told Guthrie. “When you look at that situation, it’s hard to see where impeachment would qualify for that.”

Guthrie hit back at Haley’s claims and said it “doesn’t seem like much of a defense of the president — that he might have tried to do those things, but it didn’t work out.” She also said Ukraine always knows “the funding of their military is hanging over their heads” and said that aid was withheld for a time. These comments sparked a tiff between Haley about two facts — that the aid was withheld, as Guthrie said, but also released, as Haley noted.

The interview also touched on whether Trump is fit for office, a claim that has been amplified as an anonymous author is set to publish a tell-all detailing an “unprecedented behind-the-scenes portrait of the Trump presidency,” The Washington Post reported. The book is written by a “senior Trump administration official” and includes allegations that the president “cannot focus” on more than one thing at a time and that officials have had to “dumb down” their reports for him.

Guthrie pushed Haley for details about the president’s mental fitness, asking if she ever doubted he was fit for office, if she questioned his “mental acuity” and his “ability to tell the truth.”

“Savannah, I talked to him multiple times and when I had issues he always heard me out. I never had any concern on whether he could handle the job, ever,” Haley said. “Yes, in every instance that I dealt with him, he was truthful, he listened and he was great to work.”

Haley’s first live interview Tuesday came the same day as the release of her new book “With All Due Respect: Defending America With Grit And Grace.” The book offers up a first-hand account of the Trump administration as well as Haley’s thoughts on both domestic and international events, according to Amazon.