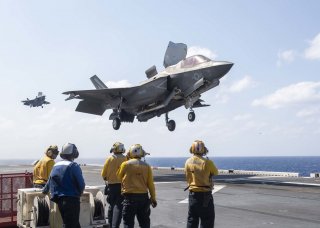 Marine Corps commandant Gen. David Berger has made it clear that the Corps could scale back its acquisition of F-35 stealth fighters as it reorganizes for naval warfare against China.

The major reason for the possible cut is conceptual. Berger wants lighter units that can move swiftly around the Western Pacific in order to dodge Chinese forces. That means smaller fighter squadrons with fewer planes.

But pilots are another factor. The Marines at present possess around 100 F-35s and plan eventually to buy up to 420. Each plane could need up to two pilots in order to fly the optimal number of hours per month.

The Corps at present doesn’t have enough aircrew. “Our continued inability to build and sustain an adequate inventory of F-35 pilots leads me to conclude that we must be pragmatic regarding our ability to support” the program, Berger said.

Marine Corps headquarters, however, is optimistic that it’s on track to have sufficient pilots.

And not just because a looming recession could reduce airlines’s demand for pilots, a key variable in military aviation-recruiting.

“The Marine Corps, like all services, has been challenged in the recent past with shortages in pilot inventory, specifically in fixed-wing tactical-aviation pilots,” Capt. Joseph Butterfield, a public affairs officer at the headquarters, told The National Interest.

“However, F-35 operational squadrons and training squadrons ... are currently staffed at 93 percent and are projected to maintain between 91 to 94 percent until at least April 1, 2021,” Butterfield added.

He provided more precise figures. On March 31, 2020, the Corps had 93 percent of the pilots it needed, according to Butterfield’s stats. This number could fall to 91 percent in October 2020 before peaking at 94 percent in April 2021.

“Fleet Marine Force F-35 operational units and training units are prioritized for staffing,” Butterfield continued. “During all transitions, including the transition to the F-35, supporting establishment staffing is lower at the beginning of the transition and gradually builds as the number of trained pilots increases.”

“With the pace of the F-35 transition, we acknowledge that staffing of the supporting establishment billets is lower than we would like to see,” he conceded. “However, we are optimistic that these numbers will increase due to jet flight school squadrons receiving additional instructors, steadily increasing production at our current F-35 training squadron, VMFAT-501, as well as the standup of our second F-35 training squadron, VMFAT-502.”

The Marines also are offering cash bonuses to new pilots, and as a result “are beginning to see an increase in retention of these pilots,” Butterfield said. “We are confident that all of the above measures will significantly improve the number of USMC tacair pilots in the future.”

If pilot-retention improves, as Marine Corps headquarters claimed it will, the Corps just might buy all 420 F-35s. But Berger for one said he’s keeping his options open.

“Right now, the program of record plows ahead as it is,” Berger told reporters on April 1, 2020. “But I’m signaling to the industry, we have to be prepared to adjust as the operating environment adjusts.”