No F-35 Required: These 5 Weapons Show Why Fighting Israel's Military Is A Losing Battle 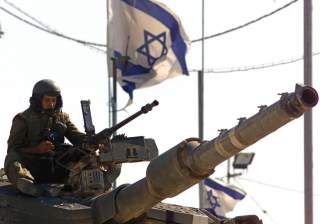 Key point: A nation always at war is always prepared.

Since 1948, the state of Israel has fielded a frighteningly effective military machine.

Built on a foundation of pre-independence militias, supplied with cast-off World War II weapons, the Israel Defense Forces (IDF) have enjoyed remarkable success in the field. In the 1960s and 1970s, both because of its unique needs and because of international boycotts, Israel began developing its own military technologies, as well as augmenting the best foreign tech. Today, Israel boasts one of the most technologically advanced military stockpiles in the world, and one of the world’s most effective workforces.

Robert Farley, a frequent contributor to the National Interest, is a visiting professor at the United States Army War College. The views expressed are those of the author and do not necessarily reflect the official policy or position of the Department of the Army, Department of Defense, or the U.S. government. This article first appeared in 2015.