No F-35s: The Navy's New Aircraft Carriers Has a Long List Of Big Problems 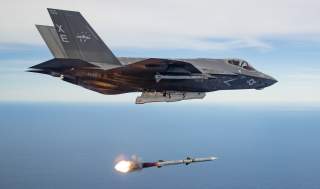 On May 30, a gigantic crane deposited the 588-ton bridge/island superstructure onto the deck of CVN-79 John F. Kennedy, the United States’ second Gerald R. Ford-class carrier. The 337-meters long behemoth is scheduled to launch from a shipyard in Newport News, Virginia this August, while lead ship CVN-78 Gerald Ford will embark on sea trials this October.

The Ford-class is meant to improve on the U.S. Navy’s current workhorse Nimitz-class supercarriers by incorporating new technologies designed to increase sortie generation (how quickly aircraft can be sustainably dispatched on missions) and reduce manning by 25 percent to “only” around 4,500 personnel.

For example, their two new A1B nuclear reactors require half the number of personnel to operate but generate 25% percent more thermal energy than the Nimitz’s A4W reactors. The additional electricity is used to power a new electromagnetic launch system that can theoretically launch aircraft faster, more cheaply and with fewer support personnel. These technologies are hoped to pave the way for future innovations such as close-defense lasers and drone squadrons.

However, while promising new technologies rarely debut without a few growing pains, the simultaneous introduction of so many means has resulted in a massive headache. Until corrected, the Ford-class’ bugs may leave the carriers performing less efficiently than its predecessors. But the Navy has already committed to launching three more Fords after the Kennedy.

The Gerald Ford suffered numerous technical setbacks and cost overruns during construction, causing its price to balloon from $10.5 billion to $13 billion. Congress imposed price caps, but then routinely waived them as newly discovered problems required more time and money.

This leaves each Ford-carrier costing roughly as much as Iran’s entire annual defense budget.

The Ford uses eleven Advanced Weapons Elevators to ferry munitions to its warplanes. Three lead from the main deck to the flight deck, seven from lower in the ship deck to the main deck, and one utility elevator is designed to serve for logistical and medical-evacuation purposes.

There’s just one hitch. When the Ford was commissioned in July 2017, none of those elevators were functional.

At a conference in January 2019, Navy Secretary Richard V. Spencer stated he had personally vowed to President Donald Trump that the Ford would have fully functional weapons elevators by the time she departed for sea trials.

“I asked him to stick his hand out; he stuck his hand out. I said, let’s do this like corporate America. I shook his hand and said, the elevators will be ready to go when she pulls out or you can fire me.”

But as of June 2019, only two of the eleven elevators are functional, and the Navy acquisition chief announced that work on getting the remainder operational would continue during sea trials.

The Ford’s most well-known innovation is its four Electromagnetic Aircraft Launch System (EMALS) used instead of traditional steam catapults. In theory, the smaller EMALS allows fine-tuning of the energy impelled upon the aircraft launching to reduce airframe stress, consume less energy per launch—saving $4 billion in operating costs over the ship’s lifetime—and launch 25 percent more aircraft. You can see the EMALS’s first launch here.

But despite their many advantages, Pentagon Department of Testing & Evaluation reports indicate they simply are breaking down many times more frequently than their predecessors.

Out of 747 shipboard launches performed with the EMALS, ten had suffered critical failures. The target reliability average was one critical failure per 4,166 launch cycles.

Compounding the problem, faulty EMALS components simply can’t be isolated because Ford uses a distributed power storage system. This means the entire EMALS generator must be “spun down” over 90 minutes, making timely and cost-efficient repairs impossible.

EMALS has an unusually high-profile detractor in President Trump, who in a speech to sailors in May 2019 doubled down on criticism of EMALs he made two years earlier:

“So, I think I’m going to put an order — when we build a new aircraft carrier, we’re going to use steam. We don’t need — we don’t need that extra speed.”

However, because the Ford’s architecture is built around EMALS, such radical re-engineering is unlikely to happen.

Bringing a 16-ton jet fighter to a halt may be even more challenging than catapulting them aloft. The Ford’s new Advanced Arresting Gear uses two “twister” water turbines and an electric induction motor to slow down the landing aircraft using a precisely calibrated degree of force—hopefully making the operation of light-weight drones more practical.

But like the EMALs, reports indicate the AAG currently is breaking down many times more frequently than the hydraulic Mark 7 system it is replacing. Out of 763 test landing documented in the report, 10 resulted in “operational failures, including one barrier failure.” The target performance was one failure per 16,500 landings.

Again, distributed power storage is implicated in making tracking down the bugs in the AAG time-consuming and difficult.

Rather than bristling with numerous specialized radars, the Ford integrates just two in its Dual Band Radar (DBR): a higher-fidelity SPY-3 X-Band Multi-Function Radar and a SPY-4 S-Band Volume Search Radar for sweeping broader areas. These combine their scans for improved accuracy, and can serve both the carrier’s air traffic control and air defense needs.

But the DOT&E reports the $500 million radar “…was plagued by extraneous false and close-in dual tracks adversely affecting its performance. Integration of DBR electronic protection remains incomplete and unfunded,” noting that ‘modern threats’ could potentially disable the vital radars.

The Navy is already planning to replace the DBR with a less expensive Enterprise Air-Search Radar System starting with the third Ford-class carrier.

To keep the Fords under spending caps, the Navy reportedly is launching them without the capability to operate its brand-new F-35C fighters. Instead, it planned to pay a higher price for integration after the flat-tops are declared operational, defeating the entire purposes of the caps. The stealth jets haven’t even been trialed on the Advanced Arrestor Gear.

The ploy didn’t escape Congress’ notice, however. The House Armed Service Committee’s draft 2020 National Defense Authorization Act requires that “the Secretary of the Navy to ensure that the aircraft carrier to be designated CVN-79 is capable of deploying with the F-35 prior to accepting delivery.”

Despite their own serious teething issues, the Navy’s F-35Cs were declared Initial Operations Capable early in 2019 and are scheduled to deploy on the Nimitz-class carrier Carl Vinson in 2021. Deployment on Ford-class carriers may wait until 2027 unless something changes.

That the Navy is buying carriers that can’t operate its new fighter planes is staggering. However, not all the news with the Ford is grim. Her combat system reportedly performed well in tests, and the DOT&E notes that certain performance thresholds expected of the carrier were set unrealistically high.

But overall, Pentagon testers bleakly concluded: “Poor or unknown reliability of key systems that support sortie generation on CVN 78 could cause a cascading series of delaying during flight operations.”

In March 2019, it also emerged that the during a shakedown cruise, the Ford experienced mysterious malfunctions in her nuclear propulsion system’s steam turbines requiring “unanticipated and extensive overhauls,” forcing her to return to port early.

To be fair, long-term improvements usually come with teething issues during early implementation. The huge investments and time pressures involved in carrier construction may make it impossible to fully iron those out before committing to future construction.

However, the Ford’s troubled odyssey highlights how budgets are routinely exceeded and basic standards of operational capability waived to usher less-than-fully capable carriers into service. As Tyler Rogoway of The Drive noted in 2018, the Navy is seeking to delay for six years supposedly mandatory shock trials—meaning it could end up launching three or four of the supercarriers before even attempting to determine their survivability in combat conditions.