No Gentleman: British Royal Navy Rocked By Another Submarine Scandal 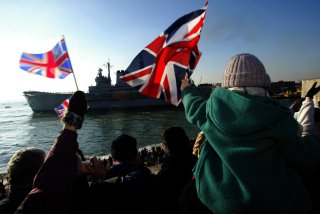 A Royal Navy junior officer has shown himself to be no gentleman, and his actions could almost be enough to make the British tabloids forget about Prince Andrew for a day or two. According to multiple media reports, Sub Lieutenant Scott Ewing has been convicted of secretly filming himself having sex with an “attractive” female officer and then uploading the footage to Snapchat. The Royal Navy officer reportedly bragged to colleagues who claimed the woman in question was “out of his league.”

Ewing admitted during his court martial that he used his phone to record the video as a way to prove “to the guys that something happened … I was fluffing my feathers,” and he added the encounter made him “feel like a lad.” During the eleven-second clip, Ewing had turned to the camera and smiled, while he made an “OK” sign with fingers. The sub lieutenant, who was based at the prestigious Britannia Royal Naval College (BRNC), commonly known as Dartmouth, told the court the recording was consensual.

The female officer, who has not been named, has said she was “extremely shocked and appalled” after learning the encounter had been recorded and shared. She also told the court that she was horrified to learn that Ewing had “massively breached my trust.”

While Ewing and the unnamed female officer had engaged in a flirtatious relationship that even included the sharing of risqué photos, the prosecution argued that the filming was done without the woman’s knowledge or consent.

“The reason you make that gesture with your hands instead of saying anything is because you didn’t want her to know,” said Lieutenant Commander Peter Barker, who served as the prosecuting officer. “She was facing away with her head down, you are doing everything you can to make sure she doesn’t know what’s going on.”

Ewing, who is now deployed to the Maritime Warfare School’s HMS Collingwood—a shore establishment in Fareham, will be sentenced at a later date.

In the fall of 2020, the crew of the HMS Vigilant also proved to be anything but vigilant in how they acted when the submarine made a port visit to the U.S. Navy’s East Coast ballistic missile submarine hub in Georgia. The sailors serving on the £3 billion submarine were ordered not to leave the quarters at the Kings Bay Navy Base, but at least a dozen totally disregarded those rules and headed off to bars, restaurants, and of course strip clubs—with at least a few even traveling to Florida, which at the time had been among the states hardest hit by the pandemic. That incident was also just the most recent event involving bad judgment aboard the Vigilant.

In 2017, some sailors serving on the boat—one of only four Vanguard-class submarines armed with Trident missiles and tasked with maintaining the UK’s nuclear deterrence force—violated liberty and tested positive for drugs; while a prior captain and fellow officer were also relieved of duty after it was found they had sex with female officers on board the boat. As a result of the prior scandals the sub earned the dubious nickname “HMS Sex and Cocaine” in the British press.