No, A Huge Meteor Did Not Threaten A U.S. Base With Total Destruction 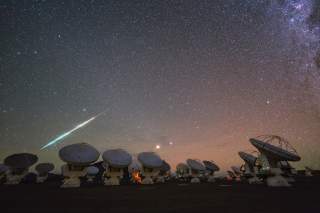 On July 25th, a fireball graced the skies over icy Greenland near Thule Air Force Base, the U.S. Air Force’s northernmost base and a key to its aerospace defense strategy. The meteor released 2.1 kilotons of energy over a installation designed to detect nuclear missile launches, which led to a predictable media freakout; Fox News posted a story about the incident beneath a picture of an explosion — definitely not this one — with a mushroom cloud spilling from Earth into space.

But the freakout is wrong. Digging into the meteor incident demonstrates that it really isn’t that big of a deal. Here’s why.

First, “The energy that came in with this was very limited,” Hans Kristensen, director of the Nuclear Information Project at the Federation of American Scientists, told Task & Purpose.

The fireball above Thule, presumably a meteorite, exploded at an altitude of 43.3 kilometers — around 27 miles — and released the same energy as a very low-yield nuclear weapon. By comparison, when a falling asteroid exploded over Chelyabinsk in Russia in 2013, yielding tons of viral videos, it released 440 kilotons of energy at an altitude of 23.3 kilometers — shattering windows for miles around the city.

A 440-kiloton event is relatively rare; a much smaller explosion like the one over Greenland, however is not uncommon. In fact, according to NASA’s Jet Propulsion Laboratory fireball tracker, there was a 2.8 kiloton fireball on June 21st that entered the atmosphere roughly 200 miles southeast of Moscow. A meteor like the one that scared everyone in Chelybinsk in 2013 is only likely to make an appearance every 60 years or so, whereas a 2.1 kiloton fireball seems to pop up at least a few times per year.

Part of the reason that this even made news waves was the possibility of a fireball being misconstrued as a first strike by a nuclear nation. For obvious species-ending reasons, nuclear war is looked at as a negative thing. And a nuclear war started by a mistake would really make us look silly to future alien anthropologists trying to figure out why humans decided to end it all.

That possibility — of a false trigger for nuclear war — appears to have originated with Kristensen in an Aug. 1 tweet:

We’re still here, so they correctly concluded it was not a Russian first strike. There are nearly 2,000 nukes on alert, ready to launch. pic.twitter.com/q01oJfRUp4

Kristensen noted that the meteor exploded right above the early warning radar at Thule Air Base, which is constantly on the watch for inbound nuclear missiles.

Speaking to Task & Purpose on Friday, Kristensen said he was not concerned that this particular meteor could have been mistaken for an ICBM, but if another such event took place during an international crisis, it has the potential of triggering a false alarm.

“We’re at peace,” he said. “We may have a tense political situation, but there is no imminent threat of an attack coming from any adversary. It’s not about the situation today. It’s about the situation that could happen with these early warning systems in a tense crisis. If you imagine an atmospheric incident such as this, or another one, it can affect the early warning systems.”

Some types of atmospheric events can look like a missile coming over the horizon, Kristensen said. For example, in September 1983, the Soviet Union’s early warning system mistook sunlight reflecting off clouds as missile launches from the United States. Only the cool thinking of Soviet Lt. Col. Stanislav Petrov prevented nuclear war.

Luckily, the systems in place to identify a first strike are seeking out objects traveling half the speed of most near-earth objects — asteroids and whatnot — that enter the atmosphere. Also, the lack of a launch indication from satellites that monitor for ICBM launches would probably tick a few boxes on the “is it a nuke?” checklist.

Task & Purpose’s Pentagon correspondent, Jeff Schogol, interrupted the U.S. Air Force PAO’s lunch hour on Friday to get its statement on the incident. ‘There has been no impact to Thule AB,” that statement read. “For further questions, you can reach out to NASA.”

So calm down. The world isn’t ending just yet. And even if it does, a tinfoil hat will not protect you.