No Longer Classified: How the U.S. Military Conducted Actual Nuclear War 'Wargames in the 1950s 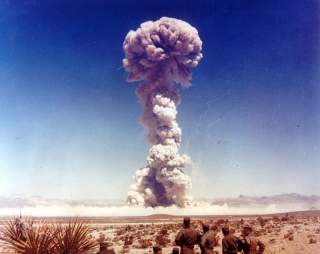 After the Soviet Union set off its first nuclear weapon in 1949, the U.S. military quickly envisioned a new type of war full of nuclear missiles, artillery and even recoilless rifles.

But with little information and no actual experience of this terrifying new battlefield, the Pentagon was desperate to find out what would really happen if its troops got nuked.

So in 1951, the Pentagon, the U.S. Army and the Atomic Energy Commission teamed up for what eventually became a series of nuclear war games—blandly nicknamed Desert Rock—in the Nevada desert. For the next seven years, technicians, scientists and academics poured over both practical and psychological data from the various exercises.

“Exercise Desert Rock I marked the first time that … troops have had the opportunity to receive realistic training in the tactical aspects of atomic warfare,” a now-declassified Army report on the test stated.

By the end of the project, the American troops had participated in eight separate Desert Rock events … which all involved nuclear detonations.

The Pentagon lauded the benefits of the training program. But more than two decades later, Washington also became aware of the significant health risks from the Desert Rock tests.

The basic concept was relatively simple. The Pentagon had already planned seven atomic tests — known as Operation Buster-Jangle — at the Nevada Proving Ground. Army officers just had to build a war game around one of the explosions.

Their scenario involved an invasion of the western continental United States by a massive hostile force — one America could only throw back with nuclear weapons.

Thousands of troops helped get everything ready and observed the results during and after the exercise. However, only about a thousand troops—mostly from the 11th Airborne Division—actually moved out into the desert after the 21-kiloton Mk-4 nuclear bomb exploded.

The soldiers were more than five miles from ground zero when the explosion — named Shot Dog — went off. Afterwards, the soldiers moved out to inspect equipment and fighting positions a mere two miles from the blast site.

Then the troops moved even closer — in single-file lines — to the epicenter to check out even more gear, fortifications and … sheep. Technicians had put the animals out in the open, in foxholes and inside structures.

Still relatively far away from ground zero, the troops saw minimal physical damage. Based on what scientists knew at the time, they determined the immediate or lasting threat of radioactive fallout was minimal.

“When asked whether they would have been willing to stay in their defensive positions during the shot, after looking over … the apparently undamaged animals, most of the men agreed that they would,” an Army review stated after the exercise.

“But [they] added that their feeling of security would have been seriously questionable.”

To help provide as honest reactions as possible, the Army declined to inform troops headed for the war game what was in store for them until almost the last possible moment. The Army told troops and the general public the tests were coming, but little else.

In the end, the secrecy didn’t seem to matter. Right before Desert Rock began, the Army found that more than 80 percent of the participants weren’t phased at all by what was coming. Almost the same number said they would’ve signed up voluntarily if given the chance.

Soldiers with higher ranks and better education seemed to have the fewest concerns.

In a virtual truism, “self-confident men showed fewer signs of anxiety,” contractors from the Human Resources Research Organization — a.k.a. HumRRO—reported.

Afterward, almost everyone claimed that the war game hadn’t been substantially more onerous than any other exercise. More than 70 percent of the troops said they would “do all right” in a nuclear war—an eight percent increase in the number of soldiers who felt this way before taking part in Desert Rock.

But soldiers might have told their superiors what they wanted to hear, at least to some degree.

After Desert Rock came to an end, analysts with the Operations Research Office at Johns Hopkins University surveyed the troops. The analysts hooked up participants to polygraph machines and questioned them about their experiences.

“Physiological evidence [from the polygraphs] revealed more fear than either performance or verbal responses indicated,” the academics concluded in their final report. “The A-bomb maneuver and a parachute jump were approximately comparable fears.”

Regardless, the Army understood that one test was not a sufficient sample set. “I look forward to further tests of this nature which will enable us to test more of the effects on personnel,” Maj. Gen. William Kean — the Desert Rock force commander — wrote in the service’s final report.

On top of that, the practice session included a parachute drop and Air Force planes zipping around near ground zero. Tanks and other armored vehicles and Marine Corps battalions took part in the training events.

Unfortunately, parachute jumps can be notoriously hard to plan and execute. As a result, the first phase of Desert Rock IV ran into hardly unexpected problems.

“The paratroops in one C-46 jumped four minutes early and landed as far as 10 miles from the intended drop area, to the [southwest] of ground zero,” according to a subsequent Pentagon report. “Five paratroops were slightly injured on landing.”

During the third phase of the test, an 11-kiloton bomb mounted on a static tower didn’t detonate as planned. Technicians eventually fixed the problem and the bomb exploded five days later.

HumRRO’s researchers found that little had changed in how troops responded psychologically. As had been the case before, soldiers’ reactions largely depended on an array of personal factors.

The men were apparently more afraid of having to face hordes of Soviet soldiers than the prospect of a nuclear war. With these sorts of responses, HumRRO even questioned whether the nuclear exercises were worth the costs of putting them on.

The Pentagon disagreed and continued the program. A year later, troops returned to the desert for a fifth war game.

Army researchers again reported little in the way of psychological impact on participants. But without actually nuking their own troops, the services couldn’t gain any real insight into just how how infantry and armored units might perform in nuclear combat.

But that didn’t stop the Pentagon from trying. After a year, Desert Rock tests started up again. The Army also attempted to estimate what a nuclear weapon could do to exposed infantry without setting off an atomic bomb.

While troops were going through the motions in Nevada, Johns Hopkins scientists tried to create a statistical model for how badly things could go for American forces in the event of a nuclear attack.

“It is considered most urgent that the Army be provided with an accurate measure of the casualties that infantry troops may suffer,” the academics insisted, despite years of tests up to that point.

The mathematical data didn’t provide any real comfort. A standard Army rifle company needed an hour and a half to get into cover. During that time, almost everyone in the unit would be completely exposed.

“Foxholes with heavy overhead cover … provide a high degree of protection against atomic attack,” the researchers found. “But the time now required to prepare such positions is dangerously long.”

In the end, the academics could only suggest that the Army find ways to dig holes faster.

In 1957, the Pentagon concluded the last of the Desert Rock exercises.

Radiation safety changed little over the course of the war games. Soldiers wore badges to record exposure to the harmful rays. But these “dosimeters” didn’t always hold up to the rigors of even mock combat.

After Desert Rock VIII, the Pentagon finally ended the project. The Army canceled plans for a ninth exercise.

Still, this didn’t stop the ground combat branch from using the Nevada sites for more tests. More than a decade after the last Desert Rock exercise, Army tanks rolled into the nuclear craters to gauge whether the massive pits might stop a Soviet advance.

By the 1970s, a different result from the Desert Rock war games was emerging — thyroid cancer and leukemia. Despite assurances at the time, the troops running around through the “contaminated zones” had been exposed to dangerous levels of radiation.

The Pentagon told the Defense Nuclear Agency to try and figure out what actual risks troops had experienced during the Desert Rock exercises and other nuclear experiments. Along with the declassification of many of the original reports, the resulting Nuclear Test Personnel Review revealed the true nature of these experiments.