No More Handshakes? How Will the Coronavirus Outbreak Impact the 2020 Presidential Election? 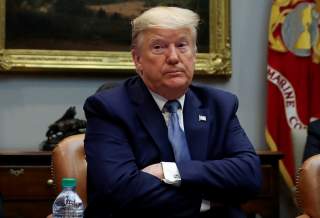 As concerns over the coronavirus spread as much as the disease, Americans are second-guessing their daily routines or any actions that place them in a large group of people. Public officials and commentators are beginning to rethink the wisdom of holding an active presidential campaign that could put both candidates and voters at a health risk.

“I do think this is a time for rethinking what campaigning looks like, and it's a good moment for that,” said Pete Buttigieg, the thirty-eight-year-old former Mayor of South Bend, Indiana who suspended his presidential campaign last week. “Now, we might be forced by this crisis, but with all of the different capabilities and possibilities for reaching voters, we should find new ways to do this if it's the right thing to do—not just for the candidates' safety, but for that of the voters."

"I hope that each candidate is having a very serious conversation with their security teams, who probably are not traditionally focused on this form of security, but need to think about the security implications, again, for the candidate, yes, but for everybody involved, about practicing campaigning as we know it," concluded Buttigieg.

And unlike the youthful mayor, the remaining major candidates for the presidency are significantly older; incumbent President Donald Trump is seventy-three, former Vice President Joe Biden is seventy-seven, and Vermont Senator Bernie Sanders is seventy-eight.

“How do we keep septuagenarian presidential candidates safe on the campaign trail? All those hugs and handshakes don’t seem like such a hot idea right now,” observed Rosa Brooks, Professor of Law at Georgetown University.

Joe Biden is being the most cautious of the candidates, saying he’ll alter his schedule and events to conform with recommendations from the Center for Disease Control. "If they conclude that there shouldn't be big indoor rallies, then we'll stop big indoor rallies," Biden said. "We're going to do whatever they say."

Bernie Sanders, who has been conducting a more strenuous campaign than his Democratic opponent with sometimes multiple rallies a day, indicated that he has no plans to change the format of his campaign. “In the best of all possible worlds, maybe. But right now, we're running as hard as we can,” he told CNN about the suggestion. “Look, this is the most consequential election in the modern history of the United States of America.”

President Trump, for his part, intimated that he would continue holding public rallies as long as his opponents did. “These were set up a long time ago, and others are,” he told the press. “I mean, you could ask that to the Democrats because they’re having a lot of rallies. They’re all having rallies, that’s what they’re doing, they’re campaigning.”