No More Neutrality: NATO and the Twilight of Swedish Exceptionalism 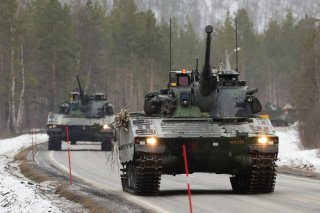 The transformation of Sweden into a rank and file NATO member is now finally at hand. Great Britain has been leading the charge by offering Sweden defense assurances during the fraught accession process and helping the United States convince a recalcitrant Turkey to consent. On August 9, President Joe Biden signed the ratification documents shortly after the U.S. Senate voted ninety-five to one in favor of Sweden's entry into the alliance. Only Sen. Josh Hawley opposed the measure out of concerns that it would impede Europe from organizing its own defense infrastructure and divert U.S. attention from focusing its military might away from Europe and towards the Asia-Pacific region to contain China. These are valid concerns but they ignore the larger phenomenon of how Sweden’s entry into NATO fundamentally changes its place in the world.

The chaotic membership process for Sweden has been illustrative of the prevailing global trends of collective action challenges that have come to define our new era of Global Enduring Disorder. It is an era where great nations with long histories of value-driven foreign policies have recently abandoned them for short-term transactionalism. It is also an era where allies feud about peripheral issues preventing positive-sum collaboration.

Rather than embracing Swedish membership, major NATO member Turkey has used every opportunity to press for its own advantage at the cost of cementing collective security, even triggering a minor parliamentary crisis in Sweden. When Sweden finally does join NATO, which is likely to happen later this year, it will mean the end of over 200 years of neutrality. Neutrality has become one of the defining features of modern Sweden’s exceptionalism, together with a strong welfare state, generous asylum policies, and the use of development aid and “feminist principles” in foreign policy. Recent years have seen Sweden’s economy become more neoliberal while its exceptionalism in foreign affairs has diminished. The imminent demise of neutrality will put the nail in the coffin of Swedish exceptionalism.

When the Swedish parliament appointed Jean Baptist Bernadotte, one of Napoleon’s foremost generals, to succeed to the Swedish throne in 1810, many expected the brash Marshal de la France to reclaim Finland, which had been lost to Russia in 1809, and lead Sweden to new heights of military glory. Instead, after turning against Napoleon in 1812 and forcing Norway into a union in 1814, Bernadotte declared Sweden a neutral country and focused his energy inwards. Since then, neutrality has been an important foreign policy tool as well as a core instrument in Sweden’s nation-building project. It was seen by many as the necessary condition that allowed the rest of Swedish exceptionalism to exist. Yet, neutrality was never constitutionally codified (as it was in post-World War II Austria). Rather, Swedish non-alignment owes as much to circumstance as choice and has often been more chimera than reality.

Sweden managed to avoid involvement in World War I, along with the rest of Scandinavia. However, it played a more dubious role during World War II. The Soviet Union was angered by Sweden’s tacit support of the Finish resistance during the Winter War of 1939-40. Yet, it was its concessions to Germany that drew heavy criticism from the Allied powers and its occupied neighbors, Norway and Denmark. Sweden supplied Germany with massive amounts of iron ore that were crucial for the Axis war effort. It also allowed German troops to pass through Swedish territory. While this “German-biased” neutrality was largely supported at home as necessary to avoid outright occupation, it left a bitter aftertaste and contributed to the country’s post-war sense of external moral obligation.

Genuine neutrality only became a reality during the Cold War. It was conceived as intrinsically beneficial and was associated with the Social Democratic notion of the Middle Way. Just as the Swedish Model required solidarity and consensus at home, it was also proactive abroad. Sweden pursued a moral mission of peace-keeping, distributing international aid, and fostering cooperation. This form of active neutrality was not purely idealistic but also allowed Sweden to leverage its unique assets to “punch above its weight,” in the words of a former minister of defense. Neutrality was buttressed by building up substantial military capabilities and exporting prodigious quantities of arms.

The heyday of Swedish international solidarity and non-alignment was under prime minister Olof Palme in the 1970s, when criticism of both the United States and the Soviet Union was common. Ironically, this was also a time of domestic retreat from core social democratic tenets and the realignment of the Swedish Model in a more neoliberal direction. Throughout the Cold War, behind official narratives of neutrality lay significant secret intelligence sharing with NATO. In the event of a Soviet invasion, Sweden could not stand alone but would receive vast military assistance from the Western bloc.

After the Cold War, Sweden joined the Partnership for Peace (PfP) implemented by NATO. Neutrality was further eroded with the entry into the European Union (EU) in 1995, where Sweden actively pushed for increased military cooperation among member states, including the Nordic and EU battle groups. Furthermore, Sweden’s accession to the EU was domestically marketed as a way for Sweden to bring its unique values to the bloc and transform its foreign policy to align with Swedish concepts of moral policymaking. The Swedish government repeatedly criticized the EU for its poor handling of the breakup of Yugoslavia and NATO for its aggressive bombing of Serbia in 1999.

In the post-9/11 world, Sweden has given clear support to NATO missions, contributing to missions in Afghanistan and Libya. In fact, Sweden became more active in both campaigns than certain major NATO militaries, most notably Germany. By the Arab Spring, non-alignment had been exchanged for military activism but Sweden’s self-image of neutrality persisted alongside its notion of being a “moral superpower” and feminizer of global affairs. Hence, a hard-nosed realism in military matters in the Middle East coexisted with idealist internationalism and a generous aid policy to Africa.

Swedish center-right parties have long called for official Swedish membership in NATO, yet public opinion has generally supported neutrality. Until the Russian invasion of Ukraine, the official Social Democratic policy was that NATO membership was completely off the table. Then, on May 15, 2022, the current Social Democratic leadership decided to join NATO, claiming that a Russian invasion of Sweden could not be ruled out, despite general skepticism that this could ever happen in practice.

Missing in the domestic debate around membership are any claims that Sweden will export its humanitarian values to NATO or that Sweden will reform NATO for the better, as it once sought to do with the EU. Gone is the moralistic and exceptionalist tone of old. What is left is a simple fear that in the face of a resurgent Russia, Sweden needs more allies and less moralism.

NATO membership signifies expedience at the expense of a self-aggrandizing national myth that has become increasingly difficult to sustain. This transformation represents another facet of both the Global Enduring Disorder and the decline of the hegemony of both Western exceptionalism and the Liberal Social Democratic project. Today, notions of Swedish exceptionalism are just as likely to evoke in Swedes our controversial Covid-19 policy, the explosion of deadly gun violence, or the hyper-marketization of our hospitals and schools, as it is to conjure notions of Sweden as a moral superpower.

Perhaps this signals a new consensus that Sweden’s humanitarian energies are best spent at home and a growing acknowledgment that Sweden is, or at least desires to be, just another European country. From a geostrategic point of view, it is a rational and laudable step for Sweden to join NATO. However, Sweden also should leverage its unique heritage and skills to incentivize broader collaboration in areas like climate change, migration, and humanitarian issues where it can help the West have a clearer moral mission and more cutting-edge policy tools.

Jason Pack is Senior Analyst at the NATO Defense College Foundation and author of Libya and the Global Enduring Disorder.

Dr Karl Karim Zakhour is University Lecturer in Political Science at Stockholm University and a Project Lead at the NATO and Global Enduring Disorder Project.