No, the Royal Navy Isn’t Sending a Hospital Ship to London 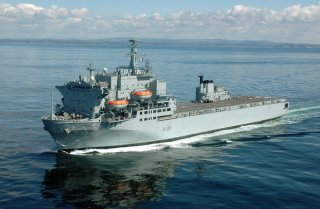 Contrary to some media reports, the Royal Navy’s casualty-receiving ship Argus is not deploying to London to bolster the city’s hospitals as the coronavirus continues to ravage the United Kingdom.

That’s because Argus isn’t really a hospital ship. And the U.K. military’s response to the pandemic is to set up and staff medical facilities on land, not at sea.

British tabloids in mid-March 2020 began speculating that Argus could sail up the River Thames and moor near London in order to receive patients that otherwise might land in overcrowded civilian hospitals.

But Argus, a 28,000-ton-displacement Royal Fleet Auxiliary vessel that functions as a training platform for helicopter pilots as well as a 100-bed receiving facility for combat casualties, is not a hospital ship in the way that, say, the U.S. Navy’s Comfort and Mercy are.

The American vessels are three times larger and boast much more sophisticated facilities. But even they are playing only a secondary role in pandemic-response, deploying to treat non-virus patients in order to relieve the patient load on civilian facilities. Comfort is sailing to New York City. Mercy is on her way to Los Angeles.

So instead of stopping at London, Argus sailed to her homeport of Devonport.

Instead of wasting resources trying to shoehorn Argus into a pandemic-response strategy, the U.K. military is focusing on setting up a makeshift hospital at London’s ExCel conference center. The military calls the facility “National Health Service Nightingale.”

“The NHS Nightingale hospital will comprise two wards each of 2,000 people,” Matt Hancock, the U.K. health secretary, said at a news conference on March 24, 2020. “With the help of the military and with NHS clinicians, we will make sure that we have the capacity that we need.”

In 2014 Argus famously deployed to Sierra Leone as part of the United Kingdom’s response to a devastating outbreak of ebola. But Sierra Leone unlike London lacked the infrastructure to support a pop-up hospital. In that case a ship made more sense.

For more than 30 years Argus has played a wide range of roles in a number of crises. The 575-foot-long ship launched in 1981 as a civilian container ship. In 1982, the Royal Navy chartered the vessel to support the Falklands War and subsequently bought her to function as an aviation training ship, launching and landing helicopters from her oddly-shaped flight deck.

Having disposed of the helicopter carrier Ocean, the Royal Navy in an emergency could deploy Argus as a sort of makeshift carrier. Instead, the fleet plans to decommission the vessel as early as 2024 without directly replacing her.

The Royal Navy is trying to shift as many at-sea aviation functions as possible to its two new aircraft carriers Queen Elizabeth and Prince of Wales. But it’s not clear that the 65,000-ton displacement vessels are suitable to all the roles that Argus currently fills.

Some experts and officials have called on the U.K. government to use medical funds to keep Argus in service.