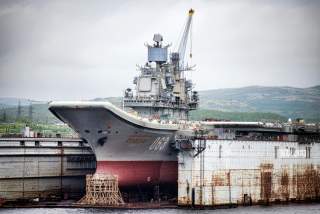 For much of its history, the Russian navy has been a subject of vigorous internal debates regarding its purpose, force structure, and the prospect of acting independently from the paternalism of the Russian army. The debate over the future of Russia’s maritime forces reached its peak during the first decades of the formation of the Soviet Union and was institutionalized by the so-called traditionalists and modernists. The former advocated for an independent and high-quality blue-water navy venturing the global waters. Modernists with their land-warfare oriented mindset argued that the navy would always remain the junior partner of the army and simply could not have a decisive role in major wars. To them, it would be a waste of resources to invest in surface ships. Hence, the emphasis on submarines that seemed a much more cost effective alternative.

Among the Soviet leaders who harbored strong anti-navy sentiments Nikita Khrushchev clearly stands out. In his pursuit to alleviate the country from the enormous cost of naval expenditure Khrushchev rendered cruisers and aircraft carriers useless. In addition, he was inspired by the increasing quality of missiles and believed that all major naval missions could be completed with submarines. As part of his naval “reforms” Khrushchev got rid of the Naval Ministry and fired Admiral Nikolai Kuznetsov to further derail the navy’s global aspirations. He sure learned the lesson the hard way during the Cuban Missile Crisis.

Admiral Sergei Gorshkov, who replaced Kuznetsov, would soon elevate the Soviet Navy to its glory. He inherited a fleet dominated by submarines and tightly controlled by the army establishment. As Gorshkov tried to map the strategy of the navy he articulated his concept of “balanced navy” that would be achieved through “optimal numerical relationship.” Although Gorshkov embarked on a major naval build-up, he too appeared to realize Moscow’s financial vulnerabilities vis-à-vis surface warships. Echoing the majority of Russian military experts, Gorshkov too treated the submarines as the most important units of the navy. Moreover, the prevailing view in the defense establishment was that the mission of surface ships was to protect the submarines.

Even Gorshkov, the most fervent advocate of putting the Soviet navy on par with the United States, could not fully accomplish his goals. After nearly thirty years at the helm of the Soviet navy, he was replaced by Vladimir Chernavin in 1985. Most Western observers took this as a sign of the Kremlin halting its naval build-up that had devastated the Soviet treasury. Several years later, the Russians canceled the construction of the nuclear-powered supercarrier Ulyanovsk. Hence, the largest warship ever to be commissioned was aircraft carrier Admiral Kuznetsov in January 1991.

Currently the sole carrier in Russia’s navy, the Admiral Kuznetsov has exposed Moscow’s lack of industrial capacity as well as significant shortages in naval aviation capabilities and human resources. While Kuznetsov embarked on a power projection mission in 2016 traveling from Barents Sea to Mediterranean Sea via Gibraltar, it ended its support of Syria operations with two lost jets due to carrier’s ongoing malfunctions. The carrier’s operations were further complicated because of the absence of catapults that prevent fighter jets from carrying enough armament. As a result, the Russians decided to move Kuznetsov’s remaining jets into Syria to avoid further losses. In October 2018, the carrier experienced another misadventure when a 70-tonne crane damaged Kuznetsov’s deck during the overhaul in Murmansk.

Despite the smoking-gun evidence of Moscow’s inability to operate carriers, the debate over flattops has gained new steam in Russia. In January 2020, President Vladimir Putin attended a military exhibition in Sevastopol where the model of new planned aircraft carrier was presented. The Russian navy reportedly expects to receive the flattop in 2030.

While the Kremlin may plan the construction of new carriers, it is highly unlikely to materialize. First and foremost, it seems improbable that Russia will want to bear the cost of the construction and operation of additional carriers. Several sources claim that the new flattop is expected to cost approximately USD 6.3 billion. But shipbuilding is a tricky business and most ships end up costing more than originally planned. One needs to look at America’s latest Gerald Ford-class supercarriers.

Secondly, building an aircraft carrier and operating it are two different beasts. The United States is a maritime nation with deep seafaring traditions. It has the expertise and human capacity to operate carriers. As Kuznetsov’s unimpressive performance off the coast of Syria showed, Russia still has a long way to go in mastering naval aviation.

Thirdly, obvious as it may seem, Russia is a prominent land power, and its main access to the sea is blocked by Arctic ice. Moscow does not have global forward power projection capabilities and is not engaged in international operations requiring air support from carriers. When it comes to Syria and the Mediterranean, carriers alone won’t give Russia the strategic edge to dominate the region. As author Jakub Grygiel argues, naval power alone cannot establish a maritime hegemony in the Mediterranean. It’s all about the control of the Mediterranean coastlines that ensures the effective command of this sea.

For decades the Mediterranean has been an “American lake” given the prowess of American navy accompanied by the alignment of Southern European countries with Washington. However, as Grygiel suggests, Moscow has leveraged its position in Syria to influence European politics. And it has done so not through its naval forces but from the shores by utilizing the flow of migrants as a political tool. Hence, Russia doesn’t need a carrier strike group to enter European politics through the Mediterranean.

Lastly, land powers go to sea after securing their land borders, such as China. However, Russia’s carrier aspirations are poised to stay on the paper as NATO, China, and turbulent Middle East will continue forcing Moscow to fixate on its insecure borders. As such, submarines will remain Russia’s primary tools for maritime operations, which are among the best in the world.