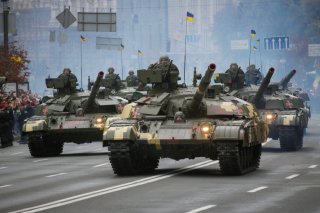 Polish president Andrzej Duda accused German chancellor Olaf Scholz on Thursday of violating his commitment to supply Poland with German tanks to compensate for tanks that the Polish government had donated to Ukraine—a scheme known as “Ringtausch,” or “exchanging of rings,” within Germany.

The plan envisioned Poland donating Soviet-era tanks to Ukraine, including T-72s, the backbone of the Soviet armored forces from 1970 onward, in exchange for modern German Leopard tanks. At the time the swap was announced, Scholz characterized it favorably, arguing that it would upgrade Poland’s military while providing Ukrainian forces with equipment that they already knew how to use and would not require sophisticated training.

However, in an interview with the German newspaper Die Welt during the World Economic Forum in Davos, Switzerland, Duda argued that Germany had not carried out its commitments under the scheme.

“They have not fulfilled this promise,” Duda said. “Frankly, we are very disappointed about this.”

“We have provided Ukraine with a large number of tanks … because we believe it is our responsibility as a neighbor,” the president continued. “By doing so, we depleted our own military potential and stockpiles.” He added that the Polish armored forces had largely swapped out T-72s for the more modern Leopards, and underlined that Berlin had already promised to deliver them but had not.

After Duda’s remarks were announced, German foreign minister Annalena Baerbock urged patience, claiming that Berlin could not deliver its tanks “at the push of a button or at the snap of a finger,” according to Die Welt. Baerbock emphasized that tanks delivered to Poland could not damage the readiness of existing German stocks, and needed to be “available, repaired, or re-ordered accordingly” before a transfer could take place. The foreign minister indicated that she would meet with her Polish counterpart, Foreign Minister Zbigniew Rau, in order to resolve “ambiguities.” German defense officials also indicated that the swap deal would include the Czech Republic as well.

Poland emerged as a key ally of Ukraine during Russia’s invasion, which began on February 24 after Kremlin-led troops invaded Ukraine from three directions. The country has since welcomed millions of Ukrainian refugees and served as a key conduit for Western supplies and military equipment. Warsaw has donated an estimated 240 tanks to Ukraine, the lion’s share of them T-72s.

In remarks to the Verkhovna Rada, Ukraine’s parliament, last week, Duda emphasized that Ukraine’s war of defense helped to protect Europe and committed his support for Ukrainian EU membership in the near future.