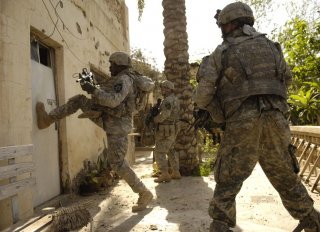 In neighboring Syria as well there remains a widespread belief that America is taking Syria’s oil, in no small part because Donald Trump announced that this was the explicit purpose of the ongoing American presence there. I asked a Syrian there recently about the oil, and he simply said that some is refined locally, and the Americans take the rest. This is not factually true—in reality, a complex network of local and regional actors collude to smuggle the oil out of northeastern Syria, and more recently an American company was briefly involved—but the perception is logical from the average Syrian’s perspective: When the American president announces that his country will take the oil, and his country’s troops are the most powerful actor in the country’s oil-producing region, and the oil is being shipped out of the country in long lines of oil trucks, why would the average person doubt that America’s intention is to take the oil, and that it is doing so? In the same way, Sahar Taha and many Iraqis like her are making a logical assumption when they assume the United States wanted to invade Iraq for economic reasons.

Most Iraqis would be surprised to know how inept the U.S. government is. They assume that the government of the world’s most powerful country must necessarily be competent and all-knowing. What Iraqis see as a grand strategy to weaken Iraq and steal its resources was, in reality, the missteps of a country that naively assumed that by installing democracy from the outside, it could simultaneously change the domestic situation of the Iraqi people and ensure the United States’ own national interests in the region. This misperception of the abilities of the U.S. government may be the biggest underlying cause of the gap in understanding the intentions behind the Iraq War.

America would do well to bear this in mind: When we act in the Middle East, few perceive our intentions to be pure or altruistic. Even those who work with the United States believe, rightly, that America is acting in its own interest, not the interests of Iraq, Syria, or any other country. The United States should still strive to align its interests with its values and try to do the right thing when it acts in the Middle East. It should not, however, believe that people in the region will see it as a white knight riding in to save the day. Knowing this fact will help us avoid getting stuck in situations where we make strategic mistakes of the tallest order—like invading Iraq—on the assumption that doing so will earn us goodwill in the region. There are plenty in Washington, DC who still say that had we intervened in Syria, the country would be a pro-American beacon of democracy in the region. We thought that about Iraq as well, and the difference between Iraqi and American perceptions of the war remain some of the strongest proof that no intervention in Syria would have led to a sudden burst of goodwill towards America in the region.

Syria scholar Dawn Chatty interviewed a Syrian-Armenian named Vahan in Damascus in 2005, whom she quoted in her book Syria: The Making and Unmaking of a Refuge State. Vahan drew an interesting parallel between the European meddling in Ottoman affairs, which he believed was a contributing factor to the Armenian genocide, and the U.S. war in Iraq, saying:

I don’t justify what the Turks have done, but Europe wanted to destabilize the Ottoman Empire for various reasons; for colonialism, or for the colonial extension. So Europe encouraged our young people to use the same slogans that they are now using to destabilize the Arab world. You see “Freedom, This and This”, “Social Justice”, “Dictatorship”…By killings tens of thousands of people they think they can extend Democracy.

Particularly among religious and ethnic minorities in the region, who have borne the brunt of the region’s recent instability, this view has only increased in prominence since 2005.

Whether or not one agrees with Vahan’s assessment of the West’s meddling in the Middle East, then or now, his and others’ reaction highlights the important point that the West should not assume that its efforts, however noble the intention, will be met with goodwill on the part of those we mean to help. I have no doubt that Americans will continue to understand the Iraq War as a misguided but noble effort gone wrong, and that many—probably most—in Iraq will continue to understand the war as one of bad intentions that went just the way America planned. The practical implications of this are potentially deadly, and as such, when a future war in the Middle East is justified on the basis that it will improve our image in the region, rest assured the messenger is either naïve or disingenuous. Judge their plan accordingly.

Sam Sweeney is a writer and translator based in the Middle East. He is a former Congressional staffer and has a Master's degree in Islamic-Christian Relations from l’Université Saint-Joseph in Beirut. He is also the president of the Mesopotamia Relief Foundation, which works in northeastern Syria.