Nord Stream and Beyond: Rescuing Ukraine While Repairing Russia Ties? 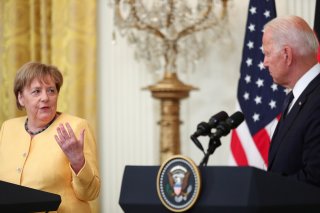 With the end of a belligerent “America First” Trump presidency and the return of a traditional multilateralist in Joe Biden, many believe that the U.S.-European relationship is back to normal and alliance unity will again prevail—a development sorely needed to face challenges from China, Russia and Iran as well as the climate crisis. Others see more lasting damage from the Trump years and a growing cleavage between U.S.-European interests and perspectives on global affairs.  The Nord Stream 2 pipeline controversy offers a revealing test of these two outlooks. The deal recently struck between President Biden and German Chancellor Angela Merkel permitting completion of the Russia-Germany gas pipeline might seem a win for allied cooperation.  But a dialogue between the American and German perspectives on the Nord Stream issues reveals deeper, persistent divisions.

United States: With economic aid and security guarantees for Ukraine, we’re trying to put our dispute over Nord Stream behind us. But Biden is pretty isolated here. Our foreign-policy elite is united in loathing his decision to halt sanctions against your pipeline from Russia.  Most believe that you’re already too dependent on Moscow, and now Russian President Vladimir Putin can threaten a cutoff if you don’t bend to his will.  Russia will rake in the profits while bypassing Ukrainian pipelines, denying them transit fees.  It’s a bad deal for Ukrainians, a bad deal for Germans, and only helps prop up Putin’s failing regime.

Germany: That’s a lot of leftover Trump kuddelmuddel—weak and contradictory arguments. You say Russia will pressure us by threatening a gas cutoff, but also that Russia is desperate for income from gas sales?  Sounds like they depend more on us that we on them!  In fact these arguments are bogus.  Nord Stream 2 only marginally increases our reliance on Russian gas; we import from other countries too; and overall use of fossil fuels is shrinking as we transition to renewables.  Wind and solar now produce three times as much of our electricity as natural gas.  In any case, we’ve been importing Russian gas for over forty years and they have a fine record of meeting their obligations.

United States: Have you forgotten about the Russian gas cut-offs in the winters of 2005 and 2009, when they tried to squeeze Ukraine and left many European customers out in the cold?  For Putin, gas sales are all about political leverage.

Germany: No doubt Russia uses trade for political advantage, just like you Americans.  But those disputes were more Kiev’s than Moscow’s fault.  First, even though Russia subsidized them with half-priced gas for over a decade, Ukraine was always in arrears—sometimes over a billion dollars.  When Russia began raising prices to market levels—which even the International Monetary Fund urged them to do—the Ukrainians rejected those prices and exploited their pipeline leverage. When Russia stopped contracting new shipments for Ukraine, the Ukrainians simply siphoned off gas destined for European buyers—they stole it. Sure Moscow played hardball, but Ukraine was no innocent.

United States: That’s not how we remember it.

Germany: Your memory is selective, in line with your prevailing Russophobia.  Why would you expect Moscow to sell its gas at cut-rate prices to a deadbeat country—one even trying to join an anti-Russian military alliance?  Why wouldn’t they seek a new route bypassing Ukrainian instability?  After those disputes we Germans weren’t keen to rely on Ukraine as a transit country either—that’s one reason Nord Stream 2 was conceived in the first place.  It’s also modern and efficient, while Ukraine’s is an aging, Soviet-era network with poor maintenance and frequent leaks and fires.

Germany: Of course it’s going to benefit us—who do you think is paying those transit fees?  German consumers, of course, who despite all the Sturm und Drang strongly favor completing Nord Stream 2 and so cutting out the middleman.  We appreciate your concern for our energy bills, but remember that your LNG is considerably more expensive than Russian gas due to the costs of liquefaction, shipping, and regasification.  And it doesn’t help Ukraine with transit fees either.  In short, pushing your “freedom gas” makes you look as self-interested as Gazprom.

United States: But isn’t it worth paying more for the security of knowing the supply is reliable?

Germany: Reliable until when? Until you decide to punish us for something else? You negotiated the Iran nuclear deal and encouraged trade as a way to draw Teheran toward the West.  Then you pulled out of the deal—and sanctioned our companies for that same trade!  You also backed out of the painstakingly negotiated U.S.-EU trade and investment pact.  As for petroleum, it was back under Nixon that you told us to diversify, to reduce reliance on the Middle East, and you greenlighted imports from the USSR.  But when the Siberian pipeline neared completion, Reagan tried to block it—just like with Nord Stream.  You Americans are not only unreliable, you also impose sanctions flagrantly, in clear violation of WTO rules.  You have no business telling us who we can or cannot trade with.

Germany: Not only do you Americans have short memories, you also have an exaggerated sense of your generosity—as if you were the world’s sole benefactor.  You’ve given Ukraine some $2 billion in aid since 2014, much of it military, but EU members have given over $10 billion.   So if you see yourself as Ukraine’s champion, why don’t you make up that lag with an $8 billion gift?  We all know the answer—Ukraine squanders aid, is mired in corruption, and has yet to implement vital reforms.

Germany: Just as corruption doomed your nation-building fantasies in the Middle East—and, most recently, Afghanistan—Biden has seen the swamp of corruption in Ukraine’s oligarchic economy close up.  Petroleum rents—“unearned” income just for sitting between a seller and a buyer—are like an addiction for the Ukrainian elite, fueling that corruption.  Of course Ukraine isn’t Iraq and we won’t just cut Kiev off. We agree to help Ukraine kick its addiction, transition to clean energy, and bolster its security.  But it’s time for realism on Ukraine, not more misguided idealism that has led to repeated regime change in the Middle East and endless NATO expansion toward Russia—policies that aggravate relations with Russia, fuel Middle East instability, and drive huge refugee flows, all major political crises for us.

United States: It was George Bush who invaded Iraq in 2003, and tried to rush Ukraine into NATO in 2008.

Germany: But Biden supported these policies, not to mention the Libya and Syria debacles that he co-authored with President Obama!  You’ve put those behind you, but we continue to pay the price of your recklessness daily.  Still, we welcome a new realism from Biden on the Middle East as well as his skepticism on the latest push to bring Ukraine into NATO.  That much of your policy elite think this is a good idea is scary, though we see some rethinking of your reflexive demonization of Russia and understanding that however much you detest Putin—we don’t like him either—Russia has legitimate national interests and Putin’s aggressive defense of those interests is popular in Russia.

United States: Whatever our mistakes in dismissing Russia’s security concerns in the 1990s and early 2000s, here we are today with Russia constantly threatening Ukraine.

Germany: Hard as it is for you to see, Ukraine’s deadliest enemy is not Russia but the cancer of corruption—which for thirty years has kept the country poor, divided, and fragile.  The best way to help Ukraine is not to further fan frictions with Russia while subsidizing that corruption, but to insist on meaningful change.  Ukraine must be weaned off the endless loans and petroleum rents that disincentivize reform, while Ukraine’s allies should not fall for the constant diversion of blame for overwhelmingly home-grown problems onto Russia.  Anti-minority language and media laws,  tolerance of extremist nationalism and whitewashing of history, do the country much harm while doing nothing to improve the economy—essentially tied with Moldova as the poorest country in Europe.

United States: President Biden has now put NATO on the back burner while fighting corruption and economic development are new priorities for Ukraine.

Germany: And not just we Germans, but a majority of Ukrainians too, strongly agree with that.

Robert David English is an Associate Professor of International Relations, Slavic Languages and Literature and Environmental Studies at the University of Southern California.