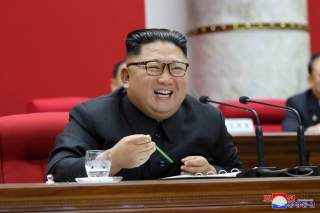 Key point: Something must be wrong internally.

North Korean tyrant Kim Jong-un late last month promised to “shift to a shocking actual action”; hinted he would no longer honor a “commitment” to a testing moratorium; and “confirmed that the world will witness a new strategic weapon.” There was also a reference to “the ultra-modern weapon system.”

Kim’s threats were delivered during the four-day 5th Plenary Meeting of the 7th Central Committee of the ruling Workers’ Party, which ended December 31.

Pyongyang, no doubt, is entering into a far more assertive phase. Given the overall situation, that would undoubtedly be a grave mistake for the regime. When regimes make grave mistakes, something must be wrong internally.

The Democratic People’s Republic of Korea since the middle of May 2018 has enjoyed an especially benign external environment. Among other things, the United States during this period has either not been enforcing North Korea sanctions or enforcing them only half-heartedly.

President Donald Trump has, for instance, been looking the other way at prohibited ship-to-ship transfers on the high seas and at the open criminal activity of money-laundering Chinese banks taking place on American soil. As a result, Kim has been getting all the money he needs to develop ballistic missiles and nuclear weapons and has, consequently, been making rapid progress on both.

As Trump makes these and other concessions, Kim has been making none. This has to be one of the best periods in DPRK diplomacy. When a ruling group obtains good results, it should not be rocking the boat with attention-grabbing threats.

So why is Kim making such menacing comments? He has repeatedly promised to both the North Korean public and regime members that he would win complete removal of the sanctions. As David Maxwell of the Foundation for Defense of Democracies noted in e-mail comments to his distribution list, “dignity” is a “key word” in Kim’s recent remarks.

“It is true that we urgently need external environment favorable for the economic construction, but we can never sell our dignity which we have so far defended as valuable as our own life, in hope for brilliant transformation,” Kim said according to an official Korean Central News Agency summary.

Kim has not been able to obtain sanctions relief, something that ended his Hanoi summit with Trump last February. So having failed at sanctions relief, Kim has left himself vulnerable. “We cannot overemphasize how important sanctions relief is to Kim,” Maxwell, who served five tours of duty with the U.S. Army on the Korean peninsula, wrote. “Not for the good of the people or the welfare of the nation-state but because he raised expectations for relief and he could not deliver. Again his personal dignity is at stake and his failure is causing great strain on the regime and him personally.”

Trump’s four-minute video, which he showed the North Korean despot at their historic summit in Singapore in June 2018, put Kim in a tight spot. That video, depicting a prosperous future for North Korea, helped raise expectations among Kim officials.

There is now in North Korea a “money culture,” where cash is king, especially among the “money masters,” the dongju. Kim has tried to appease the desire for material prosperity with the ditching of his father’s songun—“military first”—policy in favor of his byungjin line—developing both the economy and the military in tandem—and then scrapping in April 2018 byungjin for an economy-first approach.

Kim’s call last month to “tighten our belts”—in the same sentence as one of his many reminders about “dignity”—is not bound to be popular among most North Koreans, especially as people know that the ballistic missile and nuclear weapons programs continue to receive a substantial portion of the regime’s resources.

No wonder then that Kim spent a substantial portion of his year-end remarks talking about economic development. And no wonder he also blamed officials in the metal, chemical, power, coal, machine, building materials, railway, and light-industrial fields of “evil practices and stagnation.”

Kim, because he now needs to rally his people, has to issue threats, but those threats risk angering the 45th president of the United States of America.

Gordon G. Chang is the author of Nuclear Showdown: North Korea Takes On the World.  Follow him on Twitter @GordonGChang. This first appeared earlier this month.