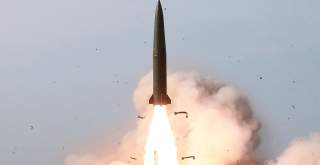 One of the most dangerous places in the world is North Korea, and not entirely in the ways one might think. Although North Korea is a nuclear state with nuclear arms, a far more dangerous scenario is the collapse of the regime in Pyongyang and the political vacuum that would create. Competing interests could draw two of the most powerful countries on Earth, the United States and China, into direct military conflict.

North Korea lies at the intersection of two strategic fault lines. The first is its proximity to China, and China’s desire to keep a friendly—if unwholesome—regime in place to safeguard its borders. China’s borders are probably the most secure than they’ve been in a thousand years, no mean feat for a country stretching from Central Asia to the Yalu River, and China would like to keep it that way. Instability along the 880-mile-long Sino–North Korean border would be an unwanted distraction, even more so than the dilemma of the nuclear-armed dictatorship.

The second fault line is the regime itself and its interaction with the United States. Pyongyang has repeatedly threatened to unify the Korean peninsula by force, resulting in a strategic alliance between the United States and South Korea. To counter the overwhelming might of the Pentagon, North Korea has developed nuclear weapons and is making rapid progress to delivery vehicles, from land-based long-range missiles to missile submarines.

North Korea has one-quarter the GDP of Ethiopia. Even in the best of times it struggles to feed all of its people. The government is brutal and alienating to the lowest tiers of society. Neighboring a rich South Korea and increasingly prosperous China, North Korean citizens are increasingly aware of the disparity in their standard of living versus their neighbors. This is not a new situation, and a collapse of the Pyongyang regime—or a revolt against it—has been prophesied many times over the past three decades. While it’s smart not to bet on a collapse any time soon, no government lasts forever, and this particular one has severe structural weaknesses.

If and when the North Korean government does collapse, some form of military intervention is inevitable. None of the regional powers will rest until all of Pyongyang’s nuclear weapons are accounted for, and nobody really knows what that number is. Armed remnants of the old government may try to seize control of nuclear weapons to gain concessions from the international community. Instability could cause millions of the the country’s 25.1 million people to hit the road, fleeing north into China and south into South Korea. None of North Korea’s neighbors want that. The absence of a central government, an overabundance of weapons and a lack of food would make for an explosive combination. Military intervention into the border areas, to control refugees and disseminate aid, is one possibility, as is a deeper intervention to seize nuclear weapons and conduct countrywide security and support operations.

Chinese military intervention in a North Korean collapse scenario is practically a certainty. At the same time, China has repeatedly stated that U.S. military forces entering North Korea would be intolerable, and yet U.S. forces regularly train to do just that. The reality is that South Korea, as capable as it is, may not have a military large enough to handle all contingencies. In such cases the power-projection capability of the U.S. military would be essential. China famously intervened in the fall of 1950 as U.S. and South Korean forces crossed the Yalu River. In the event of a North Korean collapse, barring any agreement between the two countries ahead of time, a military confrontation between the United States and China appears likely.

What would such a conflict look like? The United States would be pushing forces into East Asia, while the Chinese would be working hard to keep them out. Such a scenario plays to the strengths both sides have been steadily developing over the past decade, a forced-entry capability for the U.S. military and an antiaccess/area-denial capability for the People’s Liberation Army.

On the the Chinese side, the People’s Liberation Army would try to shut the door on East Asia while Chinese forces advance on the ground into North Korea. Antiship ballistic missiles such as the DF-21D would attempt to keep American carrier battle groups one thousand miles or farther away from the mainland—enough to restrict American naval aviation to missions involving aerial refueling. Medium-range missiles such as the DF-26 “Guam Express” would strike American air and naval facilities on the island of Guam, striking Andersen Air Force Base and U.S. Navy facilities.

Unfortunately, it would also be in China’s interests to target U.S. military facilities in Japan, particularly those on the island of Okinawa, the amphibious naval base at Sasebo, aircraft carrier and surface forces based at Yokosuka, and Misawa Air Base. This would almost certainly cause Japanese military and civilian casualties and draw Japan into the war. Chinese medium- and intermediate-range ballistic missiles, cruise missiles and tactical aircraft would all conduct strikes against American, and gradually Japanese, targets.

The Americans, on the other hand, would struggle to keep their chain of military bases leading to Korea operational while at the same time striking back at Chinese forces and racing the Chinese into North Korea—a very tall order. THAAD missile interceptors on Guam would attempt to defend the island from incoming ballistic missiles, and Patriot PAC-2 and PAC-3 batteries would defend bases, cities and economic targets from ballistic and cruise missiles. American and South Korean forces would advance north over land or conduct an amphibious landing on North Korea’s shoreline; while North Korean opposition via sea and air would be negligible, Chinese air and naval forces could act to prevent a landing.

The most dangerous aspect of a Sino-American conflict would be conventional U.S. strikes on the Chinese mainland. Such strikes would be necessary to shut down the ballistic-missile threat and allow U.S. forces greater freedom of action. On the other hand that would likely galvanize Chinese public opinion and place it squarely behind the Communist Party, making a ceasefire difficult to achieve.

A war between the United States and China is difficult to think about. It would be enormous disruptive and lethal, and could potentially involve the use of nuclear weapons. It is important for the two countries to come to an agreement in the event of a regime collapse in North Korea. Once collapse comes, events will move quickly. Unless Washington and Beijing can hammer out a framework for cooperation now, the likelihood of conflict between the two countries is unacceptably high.

Kyle Mizokami is a defense and national-security writer based in San Francisco who has appeared in the Diplomat, Foreign Policy, War is Boring and the Daily Beast. In 2009, he cofounded the defense and security blog Japan Security Watch. You can follow him on Twitter: @KyleMizokami. This article first appeared in 2017.