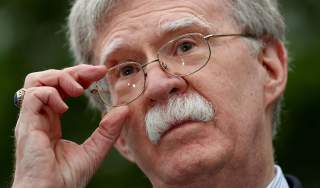 Joe Biden isn't the only target of North Korea's ire at the moment.

"His claim is indeed much more than ignorant," an unidentified DPRK spokesman said in the statement. "Our military drill neither targeted anyone nor endangered the surrounding countries, but Bolton makes dogged claims that it constitutes a violation of the 'resolutions', impudently poking his nose into other's internal matters."

Bolton, the spokesman added "war maniac" who "fabricated various provocative policies such as designation of our country as 'axis of evil', preemptive strike and regime change," per Reuters.

But at the same time, even a broken clock is right twice a day. From my former colleague Adam Weinstein:

In this pantheon of chickenhawking old guys with money and power, few hawk harder than John Bolton, the incoming national security adviser, whose appointment is freaking out even level-headed wonks with a high tolerance for overseas power projection. Bolton's politics gel with those of a lot of military hard-chargers: He believes dearly that blood makes the grass grow. First-strike on North Korea? Do it. First-strike on Iran? Do it now. Do it brusquely, with straight talk!

It's worth noting that Trump, reportedly the only remaining defense of Kim Jong Un in his own administration, spent early May growing increasingly frustrated with Bolton for trying to get him "into a war" with Venezuela amid the country's ongoing political crisis, so chances are he'd likely agree the Pyongyang on the matter.

What a world we live in.