North Korea: 'Rabid Dog' Joe Biden Should Be Hit 'With a Stick' 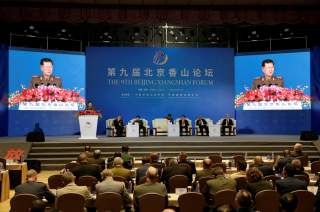 The North Korean Central News Agency said Thursday that Democratic presidential candidate Joe Biden should be “beaten to death with a stick,” calling him a “rabid dog.”

The news agency insulted the former vice president in a post that warned the Democratic People’s Republic of Korea will inflict “merciless punishment” on those who “slander the dignity of the supreme leadership.”

North Korea responded by saying Biden is “a rabid dog only keen on getting at others’ throats.”

“Such rabid dogs are second to none in their craftiness in seeking their own interests,” the news agency added.

The publication went on to list examples that North Korea sees as Biden seeking his own interests, such as Biden pushing back preparations to kill Osama Bin laden.

“Baiden, listen carefully,” the post adds. “Anyone who dare slanders the dignity of the supreme leadership of the DPRK, can never spare the DPRK’s merciless punishment whoever and wherever. And he will be made to see even in a grave what horrible consequences will be brought about by his thoughtless utterances.”

“Rabid dogs like Baiden can hurt lots of people if they are allowed to run about,” the post finishes. “They must be beaten to death with a stick, before it is too late. Doing so will be beneficial for the U.S. also.’

The Biden campaign did not respond to a request for comment from the Daily Caller News Foundation.