North Korea's New Submarine Launched Missile: Where Was It Fired From? 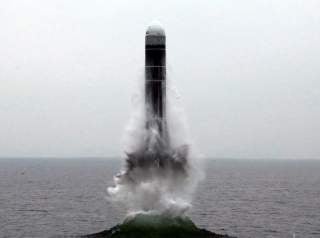 North Korea launched a ballistic missile from a submarine this week.

There are conflicting reports about Wednesday’s launch. While there appears to have been a test of a Pukguksong-3 submarine-launched ballistic missile (SLBM), it’s unclear whether it was fired from an underwater submarine or just some kind of platform.

“The missile, believed to be a type of Pukkuksong, a North Korean SLBM, was fired from off the east coast near Wonsan in an easterly direction at 7:11 a.m. and flew around 280 miles at a maximum altitude of about 565 miles,” said American news agency UPI, citing South Korea’s Joint Chiefs of Staff.

“The high altitude means the missile was fired at a high angle, and if it had been fired at a normal angle, it would have flown a much longer distance.”

However, Fox News is reporting that unidentified American sources believe the missile was fired from a surface barge or an underwater platform. That would be a much less technically demanding achievement than launching a missile from a submarine beneath the waves.

For its part, North Korea’s Korea Central News Agency merely reported that the missile was fired in “vertical mode,” and that “the test-firing scientifically and technically confirmed the key tactical and technical indexes of the newly-designed ballistic missile and had no adverse impact on the security of neighboring countries.”

Yet another North Korean missile launch is almost a yawner. What’s more troubling is that the missile landed in Japanese waters.

Japanese Defense Minister Taro Kono announced that the missile landed Japan’s Exclusive Economic Zone waters “about 350 kilometers [270 miles] north of Dogo Island, Shimane Prefecture, at around 7:27 a.m. after flying 450 [280 miles] kilometers at an altitude of up to 900 kilometers [559 miles],” according to the Japan Times. “Earlier, the Defense Ministry had said North Korea fired two projectiles separately, but Kono said Tokyo now believed a part of the missile fell away and landed elsewhere in the sea.”

A deeper concern with North Korean SLBMs is their relative invulnerability. North Korea’s land-based ballistic missiles, armed with nuclear warheads, are theoretically vulnerable to a first strike by America or South Korea. But submarines, even less sophisticated North Korean models, are much harder to detect. That’s one reason why Britain, France – and possibly Israel – maintain nuclear-armed missile submarines at sea.

Wednesday’s launch marks the first North Korean SLBM test since 2016, when a Pukguksong-1 missile flew 310 miles. Then came the Pukguksong-2, a land-based variant. The Pukgukson-3 may be a switch to a sub-based model.

Which is exactly what North Korea wants the world to be afraid of.