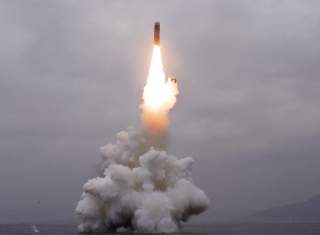 North Korea ramped up its provocations by firing a medium-range submarine-launched ballistic missile 450 kilometers (280 miles) at a lofted trajectory of 910 kilometers (565 miles) on Tuesday night that landed in Japan’s exclusive economic zone.

The regime announced it would operate in the Sea of Japan.

South Korea currently has no defenses against North Korean submarine-launched ballistic missiles, which are assessed as being capable of carrying nuclear warheads. South Korean naval ships are equipped with the Standard Missile-2 missile, which has no anti-ballistic missile capability.

Seoul is in discussions with the United States over procuring SM-3 or SM-6 missiles, which would provide ballistic missile defense capability.

With the submarine-launched ballistic missile launch, North Korea is close to its record-high year for launches of 2016, when it conducted 24 missile launches.

Dictator Kim Jong Un’s promise to President Donald Trump not to conduct nuclear or intercontinental ballistic missile tests is irrelevant, since 11 U.N. resolutions preclude any nuclear or missile testing, regardless of range.

North Korea’s crossing of yet another red line occurred shortly after it had agreed to resume working-level diplomatic meetings with U.S. counterparts to discuss denuclearization. The long-delayed resumption of U.S.-North Korean working-level meetings is a welcome—though minimalist—step forward.

But by launching the missile, North Korea forces the U.S. to either postpone the talks, or attend and tacitly accept the 21st violation of U.N. resolutions this year.

North Korea’s declarations of highly conditional parameters for progress and reminders that its patience expires at year’s end do not portend great progress, let alone a breakthrough. The U.S. would likely settle for a North Korean commitment to sustained diplomatic engagement.

The sporadic bilateral diplomatic meetings so far have been akin to “speed dating,” in which each participant seeks to quickly find out if they are compatible before moving on. It is perhaps a pleasant diversion, but unlikely to lead to a lasting relationship.

Pyongyang has been pursuing nuclear weapons since the 1960s and has been obfuscating about promises to abandon them for decades. Kim has been no more willing to abandon his country’s arsenal than were his father and grandfather, who ruled before him.

To date, Trump’s top-down approach of summit diplomacy has been no more effective than previous efforts to curtail Pyongyang’s nuclear ambitions.

As former national security adviser John Bolton noted recently, the improved capabilities and technology of short-range missiles can be adopted by long-range missiles that threaten the American homeland. The U.S. failure to fully implement sanctions has had detrimental effects.

Bolton has warned, “When you ask for consistent behavior from others, you have to demonstrate it yourself. And when you fail to do that, we open ourselves and our policy to failure.”

During the upcoming working-level meetings, U.S. diplomats should make clear that continued violations and provocative behavior by Pyongyang are unacceptable.

The U.S. should announce it will resume canceled military exercises with South Korea and more fully implement sanctions if North Korea continues to drag its feet on complying with U.N. denuclearization requirements.

Bruce Klingner, a senior research fellow for Northeast Asia at The Heritage Foundation's Asian Studies Center, spent 20 years in the intelligence community working at the CIA and Defense Intelligence Agency. Follow him @BruceKlingner.