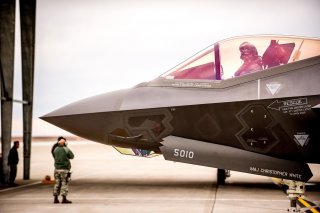 South Korea’s Air Force (ROKAF) is fast becoming an East Asian standard-bearer for Lockheed Martin’s fifth-generation stealth fighter on the back of two large F-35 acquisitions over the past decade, prompting a bellicose response from North Korea.

Seoul first took interest in the F-35 Lightning II as part of the F-X Program, a multi-stage fighter procurement initiative to ensure ROKAF’s viability into the coming decades. Other candidates included the Eurofighter Typhoon, Dassault Rafale, Boeing F-15SE, and a Su-57 prototype known as the T-50. What followed over the course of the 2010’s was a long line of internal delays and abortive negotiations, spurred by ROKAF’s dogged insistence on not exceeding its $7.3 billion (for a total of 60 units) budget.

Although highly prized by the ROKAF for its suite of advanced anti-radar capabilities, the F-35 was one of the first contenders to fall out of consideration. Against Lockheed Martin’s protestations, the U.S. The Defense Security Cooperation Agency insisted in 2013 that Washington will not greenlight any contract worth less than 12.4 trillion won-- over $10 billion. With the Typhoon bid also exceeding $7.3 billion, this left just the Boeing F-15SE Silent Eagle as the frontrunner. The conclusion of the F-X program sparked controversy in South Korean politics, with lawmakers and large swathes of ROK’s defense establishment warning that the F-15SE is insufficient as a long-term investment to protect South Korean airspace at a time of escalating military tensions with DPRK, and with China developing its own fifth-generation fighter in the form of the Chengdu J-20.

In a surprise move, South Korea’s Defense Acquisition Program Administration (DAPA) scrapped all ongoing bids and relaunched the third stage of the procurement program. The decision was, at least partly, driven by Seoul’s desire to iron out an F-35 deal with Lockheed Martin and Washington--hence, the apparent revision of program guidelines to favor the F-35A’s stealth capabilities, and the pruning of requested fighters from 60 to 40 to meet the F-35’s $120 million per unit price tag without exceeding the program budget.

A contract for 40 F-35A’s was finalized in the following year; deliveries began in 2018, and as many as 13 F-35A’s were declared operational by ROKAF in 2019. But South Korea didn’t stop there, going on to procure an additional 20 F-35B’s in 2019. These short takeoff/vertical landing (STOVL) variants will be deployed from the ROK Navy’s upcoming LPX-II light aircraft carrier, slated to enter service in the early 2030s.

Pyongyang has expressed no shortage of belligerent distaste over ROK’s ongoing F-35 acquisitions. North Korea’s Foreign Ministry Institute for American Studies denounced South Korea’s decision in a July 2019 statement:  “There is no room for doubt that the delivery of ‘F-35A’, which is also called an ‘invisible lethal weapon’, is aimed at securing military supremacy over the neighboring countries in the region and especially opening a ‘gate’ to invading the north in time of emergency on the Korean peninsula.” A policy director at the institute added that Seoul was trying to "please the United States, their master, like eating mustard in tears."

“We, on our part, have no other choice but to develop and test the special armaments to completely destroy the lethal weapons reinforced in South Korea,” the statement concluded. The DPRK made good on its promise later that month by testing several unidentified short-range ballistic missiles reportedly designed to destroy South Korean air bases, as the cycle of stalled negotiations followed by military escalation continues to roil the Korean peninsula.