Not Going Anywhere: The Abrams Tank Is Still the Army’s Favorite 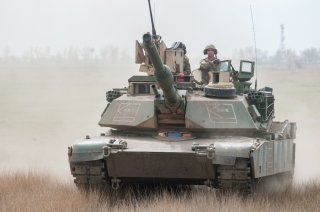 The U.S. Army is balancing several competing variables related to the future of armored vehicles. How fast are lightweight composite armor materials evolving? Is it possible in the short term to engineer an armored vehicle at a lighter weight than the 72-ton Abrams tank that can still operate with a comparable level of protection and survivability? Researchers and innovators are focused on these factors, which are dependent on the pace of innovation and the discovery of disruptive technologies.

Today, there is an effort underway by the Army to construct a future armored vehicle of some kind, although so far the work has not advanced beyond the conceptual stage. The Army is exploring the development of an Optionally Manned Tank platform. The conceptual work, senior Army leaders explain, is expected to lead to an initial determination in 2023 to establish parameters for a path forward. The realm of the possible with this program is wide open given the pace and readiness of promising new technologies and evolving conceptions of combined arms maneuver.

“Armor technology is difficult. It just is. But to think that there’s no place for armor on our future battlefield is kind of a misnomer. I think we’ve seen this disproven quite frankly. We’ve seen in Eastern Europe today, the misuse of armor, and we’ve seen the appropriate use of armor. There again, what it gets to is … ‘Are there options for human-machine teams?’ I think there are. That might mean a human is not resonant inside any platform, air or ground. We are already experimenting with air and ground robotic vehicles,” Lt. Gen. Thomas Todd, the chief innovation officer at Army Futures Command, told The National Interest in an interview.

At the same time, however, there is also a consensus that heavy armor platforms, like the Abrams tank, are going nowhere anytime soon. Simply put, there is nothing that provides a comparable level of protection. This is particularly true in light of the many upgrades the Abrams has received over the years, including active protection, advanced computing, high-fidelity long-range forward-looking infrared sensors, and multi-purpose ammunition.

This reality is likely to drive operational planning for combined arms maneuvers, at least for the next several decades. However, militaries around the world are continuing to find new ways to utilize armor and anti-armor weapons in combat, such as in Ukraine, where Russian forces have lost a significant number of armored platforms due to poor planning and tactics.