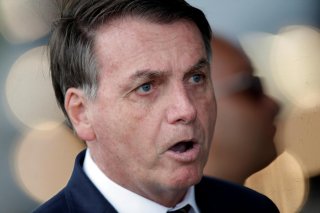 The COVID-19 coronavirus has infected more than two million people and killed more than 150,000 in almost 200 countries — figures that will be outdated by the time you read this article. Different countries have responded to the crisis by imposing national strategies that include the shutdown of non-essential places, home confinement and physical distancing.

We now know that many countries were late in imposing social distancing measures, often because the leaders of those countries failed to acknowledge the seriousness of the problem. China and the United States have been criticized for their lax response. Brazil should also be lumped into the same category.

Official figures from the Brazilian health ministry have shown a relatively small number of deaths from COVID-19 — about 2,000 people killed by the disease in a country with a population of more than 200 million. But researchers have shown Brazil is under-reporting COVID-19 infections and deaths, and that the country likely has 12 times more coronavirus cases than the official numbers.

Like the leaders of China and the United States did in the early stages of the outbreak, Brazilian President Jair Bolsonaro has downplayed the risks of the coronavirus. In late March, he argued: “Life must go on, employments should be kept, people’s income should be preserved, so all Brazilians should go back to normal.” The elderly were the most susceptible to infection, he said, so “why should schools be closed?”

Bolsonaro has opposed his own Ministry of Health’s policies regarding social isolation — so much so that he fired Minister of Health Luiz Henrique Mandetta on April 16. The final straw came after Mandetta criticized Bolsonaro when the president visited a hospital near Brasilia, but then went outside, walked among a crowd without his mask, shook hands and signed autographs.

Bolsonaro, 65, said if he were infected, he would not feel anything, or he would feel symptoms similar to “a little flu.” He has played up the fact that people under the age 40 are less likely to die from COVID-19, telling Brailizians that 90 per cent of “us” would not have any symptoms even if “we” were infected.

Brazilians should be careful not to spread the virus to “our” parents and grandparents, he conceded. If some people die, such as his mother, who is more than 90 years old, then he would say: “I’m sorry … that’s life.”

The main reason why Bolsonaro thinks the elderly and people with high-risk conditions can be sacrificed for the sake of the economy is that Brazil cannot afford an increase in unemployment, poverty and hunger.

Being suddenly concerned about Brazilians’ poor and unemployed is something new for the neoliberal populist president. He has been more concerned about the conservatives who support his government — including conservative Catholics and evangelicals. Bolsonaro has promised to increase Brazil’s GDP, but has also backed policies favoured by his conservatives base, such as opposing gender recognition and the legalization of abortion.

Why are some considered disposable?

If we follow Bolsonaro’s rationale, some groups should be considered disposable, particularly the very old and unhealthy people with high-risk conditions. But this eugenic view is absurd: emerging data from affected countries show that healthy young and middle-aged people are not spared by COVID-19, and many end up in intensive care. While Bolsonaro strongly opposes abortion, old people’s deaths from COVID-19 seem to be quite acceptable.

Bolsonaro, a former army captain, was elected in 2018 with a strong majority after campaigning as a “defender of freedom.” He has often been described as the South American version of Donald Trump, but his anti-democracy views have made him a political outcast. In the midst of the COVID-19 crisis, he appeared at a public rally where right-wing protesters were calling for an end to stay-at-home orders and a return to military rule for the country that was a military dictatorship from 1964-85.

Bolsonaro has been guided by Trump’s anti-China theories about the coronavirus, presented in Washington, D.C., and Mar-a-Lago, where the two presidents met in March. Relations between China and Brazil have been strained — especially after one of Bolsonaro’s cabinet ministers said in a tweet the coronavirus pandemic was part of Beijing’s “plan for world domination.”

Bolsonaro’s contrarian views about the pandemic have been questioned by Brazil’s governors and municipal leaders, as well as physicians and other experts. The vast majority of Brazilians have been following the World Health Organization’s recommendations of physical distancing — even criminal organizations in favelas.

A coalition against Bolsonaro has been coming together, made up of ministers, governors, judges, senior civil servants, experts, journalists and citizens. This show of solidarity indicates most Brazilians are willing to pay a heavy socio-economic price for the protection of people’s lives.

This article by Bruno Dupeyron and Catarina Segatto first appeared in The Conversation on April 4, 2020.