Not on Netflix: Iran Unveils Underground ‘Missile City’ on TV 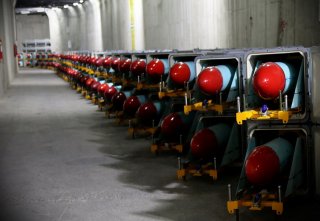 Iranian state television on Monday aired new footage of what it called the Revolutionary Guard base, which is akin to a “missile city” heavily armed with hundreds of cruise and ballistic weapons.

Inside the underground facility, the footage showed what appeared to be advanced munitions, and outside, the base boasted an array of radars and electronic warfare equipment. The TV broadcaster did not disclose the exact location of the base.

“What we see today is a small section of the great and expansive missile capability of Revolutionary Guards’ naval forces,” Guards commander Gen. Hossein Salami said on the broadcast.

Iran and the United States currently remain in a tense standoff, as both countries have indicated a desire to return to the 2015 Joint Comprehensive Plan of Action, which was the Iranian nuclear deal that gave the Middle Eastern country economic relief from sanctions in return for limits to its burgeoning nuclear program.

The new Biden administration has acknowledged that it won’t lift sanctions unless Tehran reverses its breaches of the nuclear deal. Meanwhile, Iran has demanded that the United States lift its sanctions first before engaging in any further talks.

In further escalating tensions, Iran’s Intelligence Minister Mahmoud Alavi seemed to make a masked threat regarding the country’s long pursuit of a nuclear weapon during an interview on state television early last month,

“The supreme leader (Ayatollah Ali Khamenei) has explicitly said in his fatwa that nuclear weapons are against sharia law and the Islamic Republic sees them as religiously forbidden and does not pursue them,” he said.

“But a cornered cat may behave differently from when the cat is free. And if they (Western powers) push Iran in that direction, then it’s no longer Iran’s fault.”

According to Maysam Behravesh, a research associate at Clingendael, the Netherlands Institute of International Relations, it was an “unprecedented public threat (that) captured wide media attention.”

“Middle East watchers abroad focused on the fatwa factor as well, mostly to demonstrate Iranian leaders’ untrustworthiness. Others construed Alavi’s statements as a ‘pressure’ tactic to spur the Biden administration into rejoining the 2015 Iran nuclear accord.”

Behravesh added that there are no Iranian public opinion polls that gauge citizens’ view of nuclear weapons or how that view may have changed over the past decade. But a new survey conducted jointly by the Center for International and Security Studies at the University of Maryland and the Canada-based polling agency IranPoll has indicated that “anti-compromise views and sentiments have considerably hardened over the past years.”

Most notably, public support for the Joint Comprehensive Plan of Action dropped significantly from 76 percent in August 2015 to just 51 percent in February 2021.