Not For Sale: Brazil Won't Sell Its Ancient Aircraft Carrier 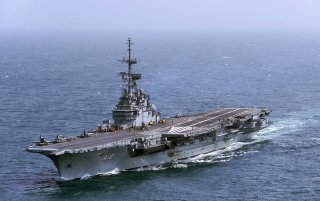 In 2017, the Brazilian Navy changed course in a very big way.

After a plan to retrofit its vintage carrier São Paulo, which would keep it in service until at least 2039, was scuttled – the decision was then made to sell the former French carrier to a ship recycler. However, after going to the auction block last month Brazil's Navy has done another turn about and suspended the sale.

The 33,000-ton-displacement São Paulo has quite a storied past, but the story is only getting more colorful and complicated now that the carrier has been decommissioned.

Brazil didn't build the warship, but rather the Clemenceau-class aircraft carrier was constructed in France and launched in 1960 into service as the FS Foch. It served in the French Navy for some 40 years, until the decision was made to sell rather than scrap it.

Thus the vessel was already among the older serving carriers in the world when it was sold to the Brazilian Navy in 2000 for $12 million.

While the price tag no doubt seemed reasonable – and what navy can't afford a carrier at that price – Brazil reportedly spent $100 million more retrofitting and then keeping the vessel seaworthy. The carrier was clearly past its prime, and tragically fires broke out on the warship twice – first in 2004 and then again in 2012 – costing the lives of several Brazilian sailors. Those accidents also took the carrier out of service for extended periods.

The sale of the Foch is just one example of how the U.K. and France have sold aging carriers to poorer navies, when the flattops arguably should have been permanently retired instead! After the second fire, Latin America's only carrier barely functioned between flag-flying and light duties, and the Brazilian defense ministry even admitted the ship's effectiveness was extremely limited.

The São Paulo was also not Brazil's first carrier.

It was sold to Brazil, renamed the Minas Gerais, and used with what can only be described as mixed results. For nearly a decade from 1987 to 1996 the Minas Gerais was unable to operate fixed-wing aircraft because it had a defective catapult so instead the warship was retasked as a helicopter carrier and amphibious assault ship before being retired in 2001 – when she was replaced by the São Paulo.

Brazil clearly didn't learn the lesson when it came to buying a used carrier.

Given the political situation in South America, and the fact that Brazil shares a border with 10 other nations – many with ongoing rebel insurgencies and some with unstable governments – the question is why Brazil has invested so heavily in carriers in the first place?

The reason has been largely symbolic or simply put: important nations have carriers.

What the government in Brasilia may have failed to realize is that important nations have reliable and seaworthy carriers, not warships that would serve better as a museum.

The Brazilian Navy's São Paulo may be officially retired, but selling the carrier for recycling has proven as problematic as the actual carrier.

This is because France was the original owner of the warship, and a contractual clause in the sale gave Paris the final say on where the carrier could be dismantled. As such, ship recycling yards allowed to participate in the auction bidding had to be approved by French authorities. Over the summer Paris even sent an official response to Brazil, which indicated that only yards included on the EU list of approved facilities could receive and scrap the vessel.

As of July, only Mediterranean Ships Breaking was listed as a fully accredited yard, while seven other competitors were discarded for not fully complying with the requirements to take part in the auction.

It is now unclear if or when the bidding for the vessel will resume. However, this could be a fortunate turn of events, as an alternative option may see the warship turned into a museum.

In June 2018, the São Paulo/Foch Institute, a not-for-profit association, was created to prevent the warship's destruction and to transform it into a naval history museum. The institute looked to the USS Intrepid as a model, as it is one of several museum ships in the United States that have become notable attractions. The goal is to save it from the fate of the Minas Gerais, which was dismantled in India in 2001 under dubious methods that failed to address environmental concerns.