Not Sci-Fi: NASA Might Turn a Moon Crater Into Radio Telescope 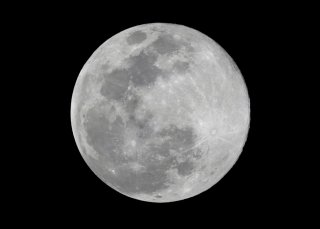 As has been theorized for decades, the far side of the moon would indeed be an amazing place to stare out into the universe.

With this in mind, NASA is taking a leap of faith as it contemplates turning a certain lunar crater into a giant radio telescope. As NASA sees it, those craters on the moon are already in the shape of a telescope dish—perhaps half the work is already done.

This lunar-crater radio telescope idea, along with twenty-two other brilliant concepts, has now been earmarked to receive a part of the $7 million funding through the NASA Innovative Advanced Concepts (NIAC) program. The Phase I award provides $125,000 to fund a nine-month study of the lunar telescope endeavor.

Saptarshi Bandyopadhyay, a robotics technologist at NASA’s Jet Propulsion Laboratory, is the individual who came up with the idea that certainly once seemed like a pipe dream. Turning this concept into reality would entail sending robots to the far side of the moon and using the machines to position a 1-km-wide wire mesh across a crater. Some estimates have the crater being 5 kilometers in diameter.

In his proposal to NASA, Bandyopadhyay highlighted the many benefits of having the Lunar Crater Radio Telescope (LCRT) on the far side of the moon.

“The moon acts as a physical shield that isolates the lunar-surface telescope from radio interferences/noises from Earth-based sources, ionosphere, Earth-orbiting satellites, and sun’s radio-noise during the lunar night,” he wrote.

If the LCRT ever becomes a reality, it would be the largest filled-aperture radio telescope in the solar system. The biggest radio telescope on Earth is China’s Aperture Spherical Telescope, which boasts a diameter of 500 meters.

“LCRT could enable tremendous scientific discoveries in the field of cosmology by observing the early universe in the 10-50m wavelength band (6–30MHz frequency band), which has not been explored by humans to date,” Bandyopadhyay wrote.

NASA was quick to point out that projects like this will likely need a decade-plus of further technology development, in addition to researching and pinpointing exactly which crater to use for the telescope.

“Building the largest filled-aperture radio telescope in the solar system on the far-side of the moon is bound to create a lot of public excitement,” Bandyopadhyay wrote. “We envisage that this concept would unlock the potential for groundbreaking scientific discoveries in radio astronomy in wavelengths that are hitherto poorly explored by humans so far.”