Not So Fast: Turkey Plays Hardball on Finland and Sweden’s NATO Applications 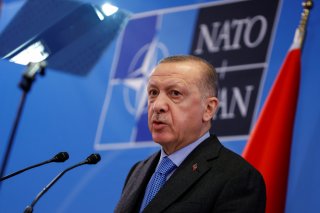 Turkey said it would block the NATO bids of Finland and Sweden, throwing the alliance’s expansion in the wake of the Russian invasion of Ukraine into question.

“We will not say ‘yes’ to those [countries] who apply sanctions to Turkey to join security organization NATO,” said Turkish president Recep Erdogan at a news conference on Monday, referring to Sweden’s 2019 restrictions on arms sales to Turkey. Ankara previously said it would not support the NATO bids of Helsinki and Stockholm until the two Nordic countries take concrete steps to renounce their support for Kurdish militants that Turkey considers to be terrorists.

An announcement on Monday stated that Finnish and Swedish officials plan to travel to Ankara in an effort to dissuade Erdogan from blocking their NATO bid. “Will they come to persuade us? Excuse us, but they shouldn’t bother,” Erdogan said, adding that they would make NATO “a place where representatives of terrorist organizations are concentrated.”

Turkey, which fields NATO’s second-largest army and occupies a critical geopolitical position as a Eurasian crossroad, was among the few alliance members to pursue a policy of neutrality toward Russia’s invasion of Ukraine. Ankara has since sought to position itself as an indispensable mediator, organizing several rounds of peace talks on Turkish soil.

Turkey’s effort to block Finland and Sweden’s NATO accession may spur other holdouts, including Hungary and Croatia, to take a more forceful stance against NATO expansion.

It remains unclear whether Ankara is categorically opposed to the NATO candidacies of Finland and Sweden or if Erdogan is holding up their membership as a tactic to secure concessions on other issues. “I’m sure this will get ironed out,” Alexander Stubb, former prime minister of Finland, told CNBC. “I imagine that there’ll be some backroom diplomacy in the next few days … just from my experience, these types of things get sorted out,” Stubbs said.

Turkey is currently seeking to buy as many as forty F-16 fighter jets and nearly eighty modernization kits for existing aircraft from the United States. The Biden administration has endorsed the sale, but Congress hasn’t approved it yet.

NATO’s leadership and top Western officials remain unfazed over Turkey’s threat to torpedo the bids of Finland and Sweden. "Turkey has made it clear that their intention is not to block membership,” said NATO chief Jens Stoltenberg on Sunday.