Now There Are Two of Them: Meet China's Crazy Fast Hypersonic Missiles 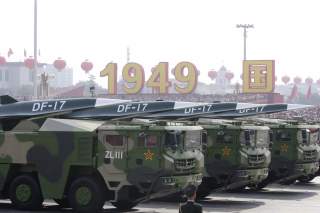 Key point: Bejing is racing ahead to ensure it has the best hypersonic weapons on the planet. Towards that end, it is testing not one, but two different missiles.

David Axe serves as Defense Editor of the National Interest. He is the author of the graphic novels  War Fix, War Is Boring and Machete Squad. This first appeared earlier in 2019 and is being reposted due to reader interest.