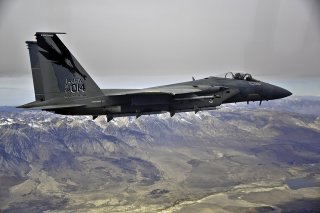 Lt. Allen, aged twenty-seven at the time of the crash, was assigned to the 493rd Fighter Squadron.

The mishap occurred during a routine local combat training flight, and the AIB found that based on a preponderance of evidence, the cause of the mishap was the pilot's “fixation on the intercept” of the simulated adversary aircraft and failure to execute cockpit instrument visual scans when the pilot encountered Instrument Meteorological Conditions.

Air Force Magazine reported that the weather that date included multiple cloud layers, and pilots were instructed to use the Instrument Meteorological Conditions Rules during the training exercise if they encountered rough weather. Under those rules, the aircraft's maneuvering would be limited.

On the day of the crash Allen was the number four aircraft in a four-ship flight conducting a defensive counter-air sortie over the North Sea in the 48th Fighter Wing’s local airspace. The exercise included a total of nine F-15Cs and one F-15D, with the latter aircraft in the role of an adversary.

The investigation found that Allen was flying at about 20,300 feet during the training exercise and when he was instructed to make a hard turn in the opposite direction to look for the “adversary aircraft” below him. The training officer said that Allen missed the target at about 12,000 feet and continued to dive. His F-15 reached 1,000 feet before he attempted to pull back up, but he was unable to do so and his plane crashed into the sea at 650 miles per hour.

“This unfortunate accident is yet another reminder of the inherent risks Airmen take on a daily basis to ensure the successes of our Air Force,” said Gen. Jeff Harrigian, U.S. Air Forces in Europe and Air Forces Africa commander. “Lt. Allen was an outstanding officer and a tremendous asset to the team. No words can compensate for such a painful and sudden loss.”

Following the crash, the British coast guard reportedly coordinated the search for the wreckage, including a helicopter, lifeboats, and other maritime support along with several USAF and United Kingdom Royal Air Force aircraft.

Allen had graduated from F-15C training in January and qualified as an F-15C wingman in May. He had received high marks for performance in training, and was known in his squadron “as a hard worker who exerted significant effort studying and preparing for missions,” according to the investigation report.

“The loss of an Airman is never easy, and this aircraft accident was no exception,” said Col. Jason Camilletti, 48th Fighter Wing commander. “Our Liberty Wing community, especially the Reapers of the 493rd Fighter Squadron, was truly touched by the tremendous outpouring of support from families, friends and partners around the globe in our time of grieving.”

The Air Force announced that it is constantly evaluating its procedures with regard to safety and ensures these findings are incorporated into flying training programs and curriculum.

The F-15C aircraft, which was valued at approximately $45 million, was destroyed. For nearly three decades, the F-15 Eagle fighter was considered the undisputed king of the skies. Until the debut of its replacement, the F-22 Raptor, the F-15 was the U.S. Air Force's frontline air superiority fighter.