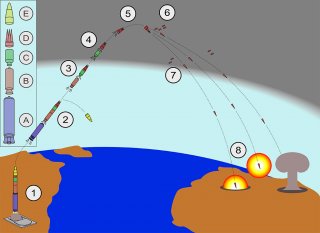 Since the release of the 2018 National Defense Strategy (NDS), the Pentagon has had to realign priorities to adjust to a slow-down in defense spending. That challenge may be exacerbated by the COVID-19 pandemic.

Some predict the pandemic-induced economic downturn and huge stimulus package will necessitate cuts to the defense budget. Yet Beijing’s fatal decision to withhold data about the virus, its malicious misinformation campaign about the virus’s origins, and its pernicious influence on the World Health Organization have served to heighten awareness of the dangers posed by the Chinese Communist Party.

As the Pentagon continues to adjust for great power competition with China, its realigned priorities must include bolstering missile defense in the Indo-Pacific, enhancing long-range precision fire capability, and defending critical assets in space. But the bedrock of U.S. national security must remain nuclear deterrence.

It’s possible to mistake nuclear deterrence for an outdated capability. Nuclear weapons have been around for over seven decades and have not been employed since World War II. It’s fashionable to advocate for hip, new technologies like artificial intelligence, directed-energy railguns and cyber hackers to compete with China. But in a great power competition, nuclear deterrence is an absolute essential.

The U.S. ICBM force in particular is key. With 400 Minuteman III missiles spread across the middle of the United States, adversaries know it’s impossible to take out all of our ICBMs before we can launch a retaliatory strike. This promise of retaliation is precisely why our adversaries have calculated time after time against using nuclear weapons—it’s not because they feel it would be immoral.

But here’s the problem: Our nuclear deterrence is deteriorating from old age, even as Russia and China modernize and expand their nuclear forces. Every single element of the U.S. nuclear deterrent has passed its projected life span. As just one example, the air-launched cruise missile carried by the B-52 bomber is now more than twenty-five years past its design life. Meanwhile, both China and Russia have nearly completed updating their nuclear arsenals. China is expected to double its nuclear stockpile in the next decade. And both Beijing and Moscow continue to develop advanced capabilities—such as hypersonic missiles with intercontinental-range and ICBMs tipped with multiple warheads—that threaten the United States.

Opponents of U.S. nuclear modernization have incorrectly cited China’s No First Use policy as evidence that Beijing does not have hostile nuclear intentions. But trusting China to adhere to this “good faith” policy ignores its long history of saying one thing but doing another. For instance, Chinese state media has emphasized China’s “model” response to dealing with the COVID outbreak, even as the regime ruthlessly silenced whistleblowers who dared to expose the virus.

There’s no reason to believe that China would take a different approach to nuclear weapons. In fact, leaders have stated their intention to use nuclear weapons first if the United States intervenes in a conflict with Taiwan. Admiral Charles Richard, commander of U.S. Strategic Command, put it best when he said: “I think I could drive a truck through that No First Use policy.”

As China’s lack of desire to rise peacefully becomes more apparent, so does the importance of U.S. nuclear modernization programs remaining on schedule. If attempts to delay modernization succeed, the security consequences could be grave. For example, there is “no margin” for another life extension for our aging Minuteman III missiles. Either the Ground Based Strategic Deterrent goes forward, producing replacements, or our nuclear deterrent is dangerously diminished.

Deterrence depends on our adversaries perceiving that our nuclear warheads and delivery platforms will work as intended. If the United States fails to replace aging warheads or timed-out missiles, adversaries might doubt they would actually produce an unacceptable amount of damage.

Further, the perception of weakness may embolden our adversaries. China might view the time as right to invade Taiwan, or Russia might invade a Baltic state. These calculations—which are not at all implausible—could drag the United States into a nuclear conflict.

Critics of nuclear deterrence argue that the United States should prioritize arms control over modernization. But if our deterrent strength ebbs, leading adversaries to believe they own the advantage, what incentive would they have to negotiate? States enter arms control agreements when it is in their interest to reduce or constrain weapons. But if the United States is forced to retire its nuclear forces unilaterally as a result of obsolescence, Russia and China would not reduce their own forces in exchange, just to be nice. Instead, they would gladly accept this most imprudent gift.

The Defense Department may need to make changes to its budget due to the pandemic. And, of course, finding ways to reduce the costs of nuclear modernization would be a welcome development. But we must not allow opponents of nuclear deterrence to use the pandemic as an excuse to advance their categorical anti-nuclear agenda. Rather, in a time of global uncertainty, there is no more important national security priority than ensuring a strong nuclear deterrent.