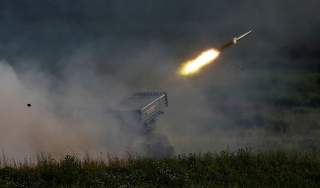 Russia’s Avangard hypersonic boost-glide missile is about to operational.

“This missile system is set to go on combat alert in December 2019,” Russia’s Ministry of Defense announced.

TASS also noted that another defense industry source said in October 2018 that “two Avangard regiments with six silo-based missiles each were due to assume combat duty in Russia.” And in December 2018, Sergei Karakayev, chief of the Strategic Missile Force, said that Avangard be deployed with the Dombarovsky missile division in the Orenburg Region in 2019. Orenburg is a city in southwest Russia near the border with Kazakhstan.

The Avangard is a nuclear-armed glider that travels at hypersonic (faster than Mach 5) speed. Lofted high into the atmosphere atop an ICBM, the glider descends on to its target with such velocity that it will be difficult to intercept the weapon.

“The boost-glide vehicle is capable of flying at over 20 times the speed of sound in the dense layers of the atmosphere, maneuvering by its flight path and its altitude and breaching any anti-missile defense,” said TASS. That last part is key: this is Moscow’s response to U.S. ballistic missile defense, which has stoked Kremlin fears that America will out to neutralize Russia’s nuclear deterrent.

Coincidentally or not, Russia has also just shown Avangard to U.S. inspectors, as required by the provisions of the New Strategic Arms Reduction Treaty, or New START. “A U.S. inspection group was shown the Avangard missile system with the hypersonic boost-glide vehicle on the territory of Russia on November 24-26, 2019," said the Ministry of Defense, which said it permitted the inspection to keep the treaty “viable and effective.”

New START, which limits the number and type of nuclear weapons possessed by the U.S. and Russia, was signed in 2010 under the Obama administration, and is set to expire in February 2020. While the Trump administration has not yet decided whether to renew or pull out of the accord, it did formally withdraw from the Intermediate-Range Nuclear Forces (INF) treaty this year. The INF accord, signed in 1987 by the Reagan administration, resulted in America and Russia slashing their arsenals of cruise missiles as well as short- and medium-range ballistic missiles.

The U.S. withdrawal from the INF agreement has spurred fears that the Washington and Moscow will revive the costly and dangerous Cold War nuclear arms race. At the same time, Russia has been developing a potpourri of exotic – and even bizarre -- “wonder weapons” such the Avangard, the Poseidon thermonuclear-armed robot torpedo, and a nuclear-powered cruise missile.

With an arsenal of 528 land- and submarine-based ICBMs, plus nuclear weapons on bombers, Russia would already seem to have an immensely powerful nuclear capability. In that sense, Avangard doesn’t add very much – unless the U.S. can develop a ballistic missile defense system that can stop hundreds of ICBMs. So far, America’s missile defenses have only focused on intercepting a handful of ICBMs launched by a small power like North Korea.