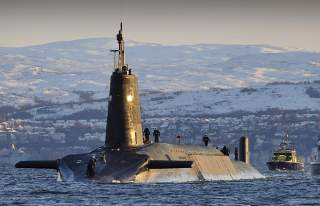 Australia’s deteriorating strategic outlook raises the question under what conditions should we develop a nuclear weapon of our own? This option was seriously considered by Australian governments in the 1960s, and the Department of Defense kept the technological lead time for an Australian nuclear weapon under review until the early 1980s. That was at the height of the Cold War and, as one of America’s closest allies, we faced a real risk of Soviet nuclear attack.

We face no such risk these days. Nevertheless, we now have the prospect—for the first time since World War II—of a potential major-power adversary threatening us with high-intensity military conflict in our neighborhood. This is not to identify China as an inevitable adversary, but prudent defense planning needs to accept that Beijing is developing the conventional military capabilities to threaten us seriously—were its intentions to change. Military developments in our region of primary strategic concern now require a change to our assessments about intelligence warning time.

President Donald Trump’s attitude towards US friends and allies has been negative, which raises important questions about the need for us to become more self-reliant. Because of the uncertainties now surrounding America’s commitment to its allies, we may also need to revisit the reassurance about extended nuclear deterrence that we have enjoyed since the creation of ANZUS in 1951.

So far, Trump hasn’t been critical of Japan on alliance matters. However, Tokyo spends only 1% of its GDP on defense and could become a target for his criticism of allies that allegedly don’t pay their way on defense. A looming uncertainty for Tokyo is whether Trump will do a deal with North Korea on its ICBMs but leave its short- and medium-range nuclear weapons untouched. That would create grave uncertainty in Tokyo about the dependability of America’s extended nuclear deterrence. Japan has the latent capability to develop its own nuclear weapons relatively quickly.

Such a development in Japan would necessarily have repercussions on Australia’s own trust in US extended nuclear deterrence. Even without that development, Canberra may need to focus on just how dependable the US nuclear umbrella is to us these days. This will be especially the case if China continues aggressively to expand its military presence into Australia’s strategic space in Southeast Asia and the South Pacific.

In any case, we need to prepare for the prospect that we will come under increasing pressure from the Trump administration to spend more on defense and to become more able to defend ourselves—if necessary from a heavily armed China. If, in extremis, we can no longer depend upon the US to defend us from threats from a nuclear-armed China, Australia might have to revisit the technological lead time we need to develop an independent nuclear weapon.

This would be a momentous step to take, requiring us to withdraw from the Nuclear Non-Proliferation Treaty by claiming that extraordinary events had jeopardized our supreme national interests.

In the classified guidance of Australian defense policy in 1968, the defense committee’s recommendation to the government was, ‘should a serious breakdown in the international order appear likely to develop, Australia might wish to reconsider the possibility of a requirement for a nuclear capacity’. The question now is whether we have arrived at such a breakdown in the international order. My answer to that is: not yet, but we need to monitor events very closely.

Let me be clear: just by raising the nuclear option I recognize it’s a highly contentious matter. There are grave moral issues involved in going nuclear, as well as likely severe international ramifications. And although it may be relatively easy for Australia to develop a nuclear bomb within, say, five years of a decision to do so, there would be perhaps insurmountable difficulties in acquiring a deliverable weapon system.

The two most obvious delivery options are ballistic missiles launched from a nuclear-powered submarine, or a long-range nuclear cruise missile carried by a strategic bomber. Neither of those options would be cheap and there are important questions about who would provide us with the technology. Even the UK depends on the US to supply it with the Trident D5 intercontinental ballistic missiles carried by its four strategic nuclear submarines (SSBNs).

The only other credible option short of such hugely expensive ballistic-missile-firing submarines would be the new US stealth strategic bomber, the B-21 Raider, which is still under development. Either way, our dependence on American technology would have serious implications for the national sovereignty of an independent nuclear deterrent.

The most sensitive question, however, would be the precise purpose of such an Australian nuclear capability. To have an effective nuclear deterrent against a major power, we would need to acquire a weapon that has both the range and destructive power to be a survivable second-strike option.

So, we face a stark dilemma: increasing uncertainty about US extended nuclear deterrence versus the daunting alternative of acquiring our own nuclear deterrent. The other alternative is to simply accept (as we did in the Cold War) that we are a nuclear target and take our chances.

My view is that Australia should at least be looking at options and lead times. Doing so doesn’t commit us to proliferating.

The only other credible option is for us to develop a strong conventional force capable of denying the approaches to Australia to any well-armed adversary. That would demand a substantial increase in our defense budget, but it would leave us vulnerable to Trump’s ambiguous ‘America First’ version of extended nuclear deterrence.

Paul Dibb is emeritus professor of strategic studies at The Australian National University.