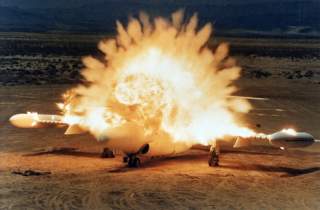 On July 19, 1957 five Air Force officers assembled in the open desert basin of the Yucca Flats of Nevada and glanced with nervous smiles up at a jet fighter flying high overhead.  They were accompanied by a civilian defense photographer wearing a baseball hat named George Yoshitake.