NYC Mayor Bill de Blasio: More Than Half of City Residents Could Get Coronavirus 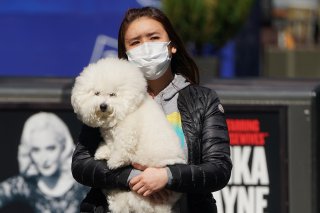 Since the beginning of the coronavirus pandemic in the United States, New York has been one of the hardest-hit states and now leads the country in both positive cases and deaths. Over 37,000 people have been diagnosed with the virus in New York, which is close to half of the national cases. Likewise, New York has suffered 385 deaths, a third of the national total.

199 of these deaths were in New York City, where Mayor Bill de Blasio is now telling his denizens that they could prepare for half of the city to be infected with the coronavirus by the time the pandemic has run its course. “It’s a fair bet to say that half of all New Yorkers, and maybe more than half, will end up contracting this disease,” de Blasio said, an estimate that would total over four million people. “And that’s worrisome, very deeply worrisome, for all of us, but we have to start with the truth.”

Freezer trucks have been set up outside city hospitals to accept the influx of cadavers and keep them preserved to prevent rotting. “I know the morgues push a really strong emotional button, obviously. We’re all humans. It’s a very troubling thing to see, and it makes it very immediate, very visceral. It’s going to be very, very painful,” the Mayor continued.

De Blasio, a former Democratic presidential candidate, has been very critical of the Trump administration’s response to the crisis. “The fate of New York City rests in the hands of one man. He is a New Yorker. And right now, he is betraying the city he comes from,” de Blasio told reporters last week, comparing Trump to Herbert Hoover.

Mayor de Blasio, who in the late 1980s traveled to Nicaragua in support of the Sandinista revolution, has called for the nationalization of major industries to curb the public health crisis. “This is a case for a nationalization, literally a nationalization, of crucial factories and industries that could produce the medical supplies to prepare this country for what we need,” he said less than two weeks ago. In a separate interview, de Blasio called for the federal government to take control of the nation’s supply chain.

De Blasio currently holds a 40% approval rating with his fellow New Yorkers, a third of whom say he is doing a “poor job” managing the outbreak in the city. His standing is not helped by public relations disasters like enforcing the mandatory closure of all gyms in New York City so as to curb the spread of the virus, and then still going to work out at his local Brooklyn public gym.

“There was almost no one there. I had heard that information prior,” he tried to explain in response to the public outrage. “I suspected that we were all going to be about to close them down, and this would be the last time to get some exercise.”