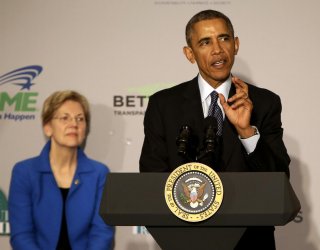 Warren “provides a cogent summary of how federal policymakers should be thinking about the pandemic in the coming months,” Obama said Monday on Twitter, referring to the Massachusetts senators’ belief that the federal government should direct states on a strategy.

Obama included in his tweet a link to an Vox article fleshing out Warren’s multiple plans before noting that Warren “often does” provide wise advice on such issues.

Warren rolled out first plan in January on ways to confront the virus — which originated in Wuhan, China, before spreading across the globe, killing tens of thousands of people in the process. She suggested in a Medium post that month that federal funding should go to preventing pandemics before they begin.

Warren added a second plan and third plan in March, both of which address the virus’ march through the United States as well as how the pandemic has impacted the American economy, which has bled more than 10 million jobs since the government effectively ground the country to a screeching halt.

Warren, a Democrat who ran unsuccessfully for president in 2020, has rehashing a common criticism that Trump is not doing enough to force states into acting in a unified way to protect citizens. Other Democrats have mirrored this position.

Former Vice President Joe Biden, for instance, offered on April 1 to call the White House and propose some ideas to help the president hash a game plan.

“As he has said repeatedly, Donald Trump is not accountable for coronavirus itself — but he is accountable for the federal government’s slow and chaotic response to this outbreak,” Biden’s presidential campaign manager Kate Bedingfield said on Fox News on April.