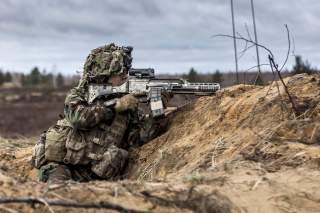 Europe should create its own military space force, just like America is planning to do, says a European Union lawmaker.

“The U.S. have created a Space Force,” said Elzbieta Bienkowska, former Polish deputy prime minister and now European Commissioner for the Internal Market, speaking at a recent European space conference. “We need, on the medium to long-term, a European Space Force. I hear some spoke about an orbital society: Why not? I hear others targeting the moon and the moon village: Why not? I hear also that Europe should have the capacity to have human space flights and not depend on others: Certainly yes! We need to set in motion a process to define Europe’s vision for space.”

Bienkowska said that “several member states are considering just now ways to strengthen their defense doctrine in the space dimension. They are talking about space forces,” said Bienkowska. However, Jorge Domecq, chief executive of the European Defense Agency, told the EUobserver news site that he was unaware of the space force idea, and no EU state has so far called for it.

Bienkowska’s proposal comes after French president Emmanuel Macron called for the creation of a European army. While an EU army shows no signs of coming to fruition, it is seen as a potential European response as the Trump administration appears to be disengaging from Europe and the North Atlantic Treaty Organization (NATO). Yet interestingly, Domecq suggested that a European space force would actually complement the proposed U.S. Space Force, which would absorb the space capabilities of the various U.S. military branches. “The U.S. is an important ally,” he said. “If your main partner is developing its space capabilities, its space policies in a direction, you have to take note of them when you are developing further your space defense programs.”

One EU source told the EUobserver that while an EU space force was unlikely, European militaries could take advantage of the EU’s civilian space projects, notably the Galileo navigational satellite system, which is Europe’s counterpart to America’s GPS.

The concept of a European space force illustrates the potential—and the problems—of pan-European defense. The EU as a whole comprises one of the world’s largest economies, with its twenty-eight states including several with technologically advanced and powerful militaries, including Britain, France and Germany. The EU even has its own space program, though it’s dwarfed by America’s NASA and China’s space agency.

On the other hand, a European space force would suffer from the same obstacles and limitations that a European army would face. It would have to accommodate nations with different languages, cultures and economic and technological capacity. Consensus would be needed among countries with different strategic interests: France, which has a space program that has developed rockets and satellites, may have different priorities than Bulgaria and Greece. Financially, if only four out of twenty-nine members of NATO—which has been the de facto European army—have met the recommended threshold of spending 2 percent of their GDP on defense, then reliable funding for an EU space force would be questionable.

Nonetheless, space is becoming the next battleground, and the United States, Russia and China are devoting vast resources to prepare for a conflict where the communication, navigation and surveillance satellites that high-tech armies depend on will be targets. The question is whether Europe can rely on America to provide these capabilities. And if not, can Europe remain militarily relevant without its own space force?