Ohio Cheerleader Who Buried Baby in Backyard 'Not Guilty' for Murder 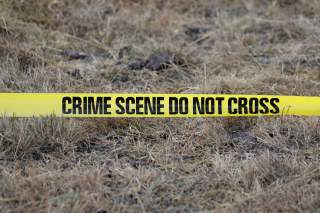 An Ohio high school cheerleader has been found not guilty after being accused of killing her newborn baby and burying the baby in her backyard.

Twenty-year-old Brooke Skylar Richardson delivered her baby in her bedroom on May 7, 2017 at the age of 18, CNN reports. Two months later, authorities discovered the baby’s skeletal remains buried in her backyard with a flower placed on top.

The investigation began after Richardson went to the doctor’s office without a baby after previously going to the office for a pregnancy test, prosecutors said, CNN reports. When the doctor asked where the baby was, Richardson allegedly burst into tears and said she buried the baby in the backyard after it was stillborn.

A jury, composed of seven women and five men, convicted Richardson of abuse of a corpse Thursday but found Richardson not guilty of aggravated murder, involuntary manslaughter and child endangerment, according to CNN affiliate WKRC.

Richardson faces up to a year in prison and will be sentenced Friday, according to NBC.

#SkylarRichardson had nothing to say as she left the courtroom @Local12 pic.twitter.com/Jlc7u2hEun

Prosecutors alleged Richardson had entered a new relationship when she discovered she was pregnant and subsequently killed her baby in the middle of the night, wanting nothing to do with the baby or the child’s father.

“Upon finding out that she was pregnant by a boy she had nothing to do with, Brooke Richardson burst into tears and told her doctor that she could not have this baby,” Prosecutor Steve Knippen told jurors this month, according to WKRC.

The prosecutors also showed a picture of Richardson at the gym only hours after she gave birth, according to WKRC, and a text message to her mother that said, “My belly is back, OMG. I am never, ever, ever, ever letting it get like this again. You’re about to see me looking freaking better than before, OMG.”

Richardson denied burning the baby’s body in a second police interview more than 15 times, according to WKRC. However, she later said that she had tried to cremate the body. Her attorneys, Charlie Rittgers and his son, also named Charlie, say she was coerced.

“I believed in the case. I still do. Skylar’s innocent, and the jury just found her not guilty, which is not synonymous with innocent, but I truly believe she’s innocent,” said the younger Rittgers, according to WKRC.

“It was so juicy for the government to think that, ‘Oh, not only did she murder her baby, but she burned her baby, which tainted the whole jury pool, which is what we were worried about,” the older Rittgers said. The defense team also said that there is no evidence that the baby was born alive.

“I understand why the jury did what they did. I get it. But, I do believe she killed her child. As I sit here today, I believe it. I understand there are proof issues,” Fornshell said. “The fact that she meets 15 out of the 15 criteria for neonaticide to just walk away, you know what, we’re not going to try. That’s not who we are.”