Old Allies: France and U.S. Strengthen Naval Cooperation With an Eye on Russia 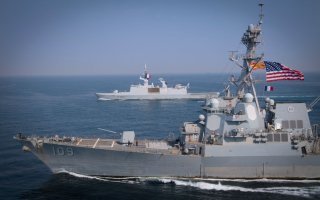 As the conflict in Ukraine continues to rage, the U. S. Navy’s top sailor and his French counterpart see naval cooperation as fertile ground for better interoperability and increased compatibility between the two maritime powers.

Speaking at a press conference, Adm. Michael M. Gilday of the United States Navy and his French counterpart Pierre Vandier talked about the myriad challenges facing their navies around the globe.

Answering a question about the protection of seabed infrastructure, Admiral Vandier explained that “the aim of the French seabed strategy is to reconquer a domain where we lost our efforts in the – at the end of the ’90s."

“We think that the technology which is now available in the industry, and especially in the offshore industry, is able to let us find some objects in the depth, to monitor the undersea cables, and to see what bad guys are doing in these – in deep areas,” Admiral Vandier explained. “And so for the global protection of our boundaries, of our submarines, this domain is critical.”

Admiral Gilday concurred though he added that compatibility between the French and the United States should not be limited to just the sea but should also happen in the air.

“I would say, with respect to technology transfer, the thing we have to be careful of is self-limiting. And I think that the cooperation we’ve seen across NATO during this Russia-Ukraine crisis, and the sharing of information and intelligence from the United States has also given us momentum to break down barriers in trade, information, and technology with our close partners, like the French,” Admiral Gilday said, adding that “we have to."

“So a really good example is fourth and fifth generation – fighter generation. The F-35 is a highly technical, highly classified platform. But the first time that we worked together with the French, with their jets and ours, can’t be in conflict. It has to be now.”

“And so we’re taking a much more practical approach. The secretary of defense is urging us to do that, to look for areas like unmanned. And so with unmanned as another example, artificial intelligence and the software integration into those platforms is also really important,” Admiral Gilday explained.

“The French joined us in the international maritime exercise in the Middle East a few months ago to just – to get after that problem set itself. So we’re trading information and concepts of operations from the seabed to space, so that we can operate more closely together.”

Be it in the Middle East, Europe, at sea, or in the air, the United States and its allies are ramping up cooperation with global threats in mind.