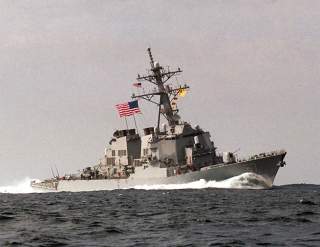 Key point: Although they were supposed to be replaced, the newer destroyers aren't even designed yet. This unfortunate position means the Navy will just keep relying on its old, but still excellent, design.

The U.S. Navy might not have any choice but to buy more of its venerable Arleigh Burke-class destroyers. It’s a risky proposition.

Delays in designing a new large surface combatant, or LSC, could compel the fleet to develop yet another version of the Burke, which has been in production in a succession of increasingly capable -- and heavy -- variants since the late 1980s.

Budgetary pressure and uncertainty about the LSC’s design “are forcing the service to think about what the Arleigh Burke program will look like beyond the current multi-year contract for the Flight III configuration,” USNI News reporter Megan Eckstein reported, citing the Navy’s program executive officer for ships, Rear Adm. Bill Galinis.

The Flight III, the current version of the Burke, itself is a gap-filler. The Navy commissioned the Flight III design in the mid-2000s after repeated failures to develop a brand-new class of destroyer.

The $2-billion Flight III is slightly bigger than earlier Burkes are and features a new radar and more power generation. A Burke-class destroyer is around 500 feet long and displaces around 9,000 tons of water. Armament includes nearly 100 missile cells plus guns.

The Navy through 2025 is building 13 Flight III Burkes to join 74 Burkes from earlier variants. The Navy expects each destroyer to remain in service at least 40 years, making the Burkes the most numerous and arguably most important ships in the fleet for the foreseeable future.

Besides the Burke, the Navy’s only other in-production destroyer type is the three-ship Zumwalt class. With 1980s-vintage Ticonderoga-class cruisers reaching the end of the economical service lives, the Navy had hoped to begin buying a new large surface combatant starting around 2023. Now the fleet plans to start production around 2026.

The LSC could look a lot like the Zumwalt with its roomy, downward-sloping hull and edge-mounted missile cells, Galinis said at a June 2019 symposium.

The new LSC also would have the space, sensors and communications capabilities to fully replace the cruisers as the air-defense-commander vessels for carrier strike groups. The air-defense commander coordinate air- and missile-defense for as many as a dozen surrounding ships.

It’s unclear whether a Flight III Burke can handle the air-defense commander role. A new Flight IV Burke could address the shortfalls, assuming the hull can handle additional equipment.

That’s far from a safe bet, The War Zone reporter Joe Trevithick explained. “Unfortunately, it's not clear if something like a Flight IV Arleigh Burke could help bridge the gap between the Flight III ships and the new LSC. The original design dates back to the 1980s.”

From his article in The War Zone:

The Flight IIIs are already substantially different from their earlier cousins, with a longer and stronger hull and a more robust deckhouse to accommodate the AN/SPY-6 [radar]. In all, the new derivative involved changes to 50 percent of the technical drawings associated with the Aleigh Burke class.

The Navy has already reached the same kind of developmental end state with the Ticonderoga class, which features a derivative of the now-retired Spruance-class destroyer's hullform. Those cruisers are known to be overloaded and prone to persistent cracking in their aluminum superstructures that is costly and time consuming to repair.

There may be some possibility of miniaturizing or otherwise reducing the size and weight of certain existing components to create more trade space within the Flight III design. However, it may be difficult to make any serious changes to the size and weight of various large systems, such as vertical launch system arrays, which need to be able to accommodate increasingly larger missiles, or the propulsion system.

A program to develop an improved integrated electric propulsion system for existing Arleigh Burke destroyers, a potentially space-saving and maintenance reducing effort, was a resounding failure and the Navy abandoned the plan last year.

Though the Navy had considered using a similar propulsion arrangement on the Flight III ships, in the end, these upcoming destroyers will have three uprated generators to provide necessary additional power, not an integrated electric system.

David Axe serves as Defense Editor of the National Interest. He is the author of the graphic novels  War Fix, War Is Boring and Machete Squad. This first appeared in August 2019 and is being reposted due to reader interest.