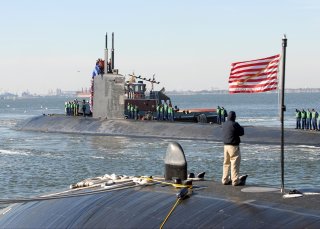 The vessel will now commence pre-maintenance smart start activities in preparation for the EOH, which is a major multi-year overhaul that is conducted near the mid-point of a submarine's service life. Necessary repairs, maintenance and modernization will be performed on the boat, and these will certify the submarine for unrestricted operations and further ensure that it is operating at full technical capacity and mission capability.

Boise's maintenance is also long overdue, and the submarine had been sitting in Norfolk as it was not dive certified since early 2017.

The submarine had been awaiting maintenance but due to congestion and delays in the Navy shipyards, it was scheduled to receive maintenance at a private shipyard in 2019 but was delayed because of workforce capacity.

This is because the submarine's EOH is quite a bit more complicated than general maintenance and far more costly. The modernization project will include upgrade works that will be carried out on the existing systems on-board the Boise, and this is expected to be completed in 2021. Huntington Ingall Industries' Newport News Shipbuilding division was awarded a $59.7 million contract to plan and carry out of the upgrade of the Boise in October 2017.

The nuclear-powered USS Boise is the second U.S. Navy vessel to be named after the capital of the U.S. State of Idaho. Its keel was laid down in August 1988 and the vessel was delivered to the U.S. Navy in September 1992.

The USS Boise was one of the U.S. Navy's 12 submarines to provide support during Operation Iraqi Freedom.  The Los Angeles-class submarine is armed with both the land-attack and anti-ship version of the Raytheon Tomahawk missile, which can be fitted with a nuclear warhead. The submarine is also fitted with four 533mm torpedo tubes located midship, along with a Mark 117 torpedo fire control system. There is capacity on the submarine for 26 torpedo tube launched weapons including Tomahawk missiles, Harpoon missiles and Mark 48 ADCAP torpedoes.

The Los Angeles-class contains more nuclear submarines than any other class in the world, and 62 of the class have been completed while 41 are still in active service including the USS Boise. This class has nearly unlimited range thanks to its1 SG6 nuclear reactor, which requires refueling after 30 years. The endurance of the boats is around 90 days.

Submarines of this class are named after American towns and cities with the exception of the USS Hyman G. Rickover, which was named for a U.S. Navy Admiral. The class remains the backbone of U.S. Navy's submarine force.