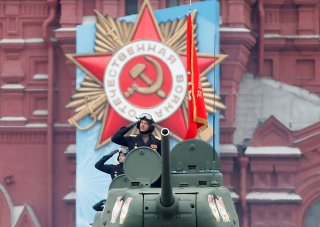 The Soviet T-34 medium tank first rolled out in 1940 and was famously deployed to counter the Nazi invasion of the Soviet Union in 1941. While nations such as Cuba, North Korea and Yemen have continued to use the aging tanks—which were introduced decades before the current crews were born—it appears that after eighty years, a few are still in limited service with the Russian military.

In fact, the World War II-era medium tanks were employed by units of the Kantemirovskaya tank division, according to DefenceBlog. The crews apparently conducted live-fire gunnery exercises operating T-34-85 tanks in the Moscow Region.

The training exercise took place on the eve of the eightieth anniversary of the start of the Soviet counteroffensive during the Battle of Moscow. More than 150 personnel and some thirty units of military equipment reportedly took part in the exercises outside of Moscow.

During the exercises, the tank crews took part in live-fire drills, firing the eighty-five-millimeter cannons at a distance of six hundred to eighteen hundred meters. However, it should be noted that at the actual engagement with the German forces, the Soviet Red Army had been equipped with the T-34/76 model—but the 76.2-millimeter gun still proved to be more than a match for any other tank in service at that time.

While the battle effectiveness of the T-34/76 was challenged later in the war, the Soviet medium tank proved to be a nasty surprise for the Germans who didn't expect to face such a formidable armored vehicle. So impressed was German General von Kleist that he even described the T-34/76 as “the finest tank in the world.”

Between 1940 and 1946, the Soviet Union produced more than fifty-eight thousand T-34 tanks of all types, and those tanks were supplied to various allies and partners throughout the world. As noted, some are still in service today.

It is likely the T-34 tanks used in this recent exercise may have been some tanks that Russia acquired from Laos in January 2019. The Southeast Asian nation sold around thirty of the tanks back to Russia as part of a three-way deal also involving Vietnam. Moscow had sought to acquire the vintage tanks, which it maintained were of the 1944 production model, for use in movies, parades, and for display at various military museums around Russia.

It was reported at the time that Laos had been the last operator of the World War II-era medium tanks, but that was later proven wrong as images appeared last year of the tank still being used in Yemen. Meanwhile, other experts noted that the tank was in service with North Korea and Cuba, as well as in the militaries of the Republic of the Congo, Guinea, Guinea-Bissau, Namibia and Vietnam.

There are actually hundreds of surviving T-34s around the world, and many are on display in museums and used as war memorials. Many “demilitarized” models are now in private collections as well. However, while it is possible to buy one for as little as $40,000, owners won't get the chance to fire the guns like those in the Kantemirovskaya tank division.