OLED HDTVs: 2 Best Money Can Buy (And a QLED Twist) 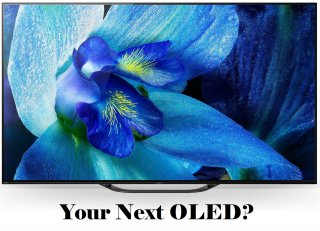 One technology that has been especially beneficial to consumers lately is the development of organic light-emitting diode (OLED) television sets. OLED represents a substantial leap over traditional LED technology, resulting in thinner displays, sharper contrasts, faster response times, and lower costs. As consumer electronics manufacturers rush to implement this new tech across their television lines some TV sets are better than others. Here are three of the best affordable OLED TVs, 55 inches or larger, available now--and for fun, one rival QLED you should check out.

Sony XBR-55A8G 55 Inch TV. The Sony 55A8G BRAVIA television set is one of the company’s midrange offerings, ideal for homes that one one, good set. Released in late 2019, the 55A8G combines 4K with OLED screen technology.  The high dynamic range set includes IMAX enhanced and Dolby Vision, as well as Sony’s TRILUMINOS technology, which uses monochromatic blue light, mixed with green and red, to achieve a true white light. At the same time the OLED technology enables the set to create deeper, truer blacks.

The set is powered by Sony’s X1 Extreme processor. The X1 Extreme remasters objects on the screen individually, frame by frame, making for smoother graduations between shades and without the banding issues that affect older TVs. The X1 Extreme also reduces image noise and improves upscaling quality when viewing older, lower quality content on the 55-inch, 4K set.

The 55AG8G is powered by Android, and an apps-based system allows the user to download Netflix, Hulu, and the various streaming services. It’s also compatible with Google Home and Alexa. At approximately $1,800 street the 55AG8G is competitive in the world of midrange TVs, especially for those households that value quality over quantity.

LG OLED55C9PUA 55 Inch TV. The LG 55C9PUA is another midrange OLED set from South Korean manufacturer LG Electronics. The 55-inch, 4K set boasts Dolby Vision, High Dynamic Range 10 bit video, and Hybrid Log-Gamma, a high dynamic range standard jointly developed by Japan’s NHK and the BBC and made royalty-free. Like all sets in this article, the 55C9PUA features a refresh rate of 120 hertz.

Just as the Sony television is powered by the X1 Extreme chip the LG model features the a9 Intelligent Processor. The a9  works frame by frame to reduce noise, sharpen the picture, and improve detail, especially with older, lower quality media. A major selling point, if you’re invested in the LG ecosystem, is the company’s ThinQ system, allowing users to control devices from their cell phone. The set also includes Google Home and Alexa capability. Unique among the sets on this list the 55C9PUA is Apple Airplay 2 compatible, enabling iPads, iPhones, and even desktop Macs to stream audio and video wirelessly to their television set. The 55C9PUA has a street price of $1,596.

Samsung Q90T QLED 4K 55-Inch TV. Unlike rivals Sony and LG, Samsung backed an alternative technology to OLED screens. The company endorsed QLED, or quantum dot Light Emitting Diode technology. Quantum dots are molecules that, when struck by LED light, emit a light of their own. The light emitted by the quantum dots travel through several layers of media, including an LCD screen, to create images on the overall television screen.  According to CNET, QLED screens can be significantly brighter than OLED screens, but OLED screens can produce better contrast and better blacks.

Samsung claims the 90T has a wider viewing angle than most TVs, an important consideration in larger viewing spaces. An ultra-thin bezel gives the impression of the TV video floating against the wall. The TV also features HDR 10 video and a Quantum 4K processor to scrub and upscale video frame by frame. Amazon’s Alexa adds an interactive aspect to the 90T, allowing the set to answer questions, set mood music, and orchestrate an Alexa-orchestrated home.

The Samsung model features two particularly interesting features specific to the brand. One is Object Tracking Sound, which uses the set’s multidirectional speakers to track particular objects and give the impression of sound that moves along with the action on the screen. Another feature particularly useful for busy homes is the Active Voice Amplifier, which detects ambient noise and automatically boosts voice dialogue. The 90T’s street price is $1797.