OLED HDTVs Have a Fatal Flaw: Burn-In (Or Not?) 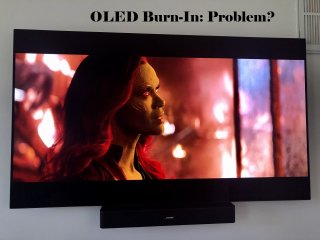 OLED TVs are huge these days, and not just when it comes to size.

RTINGS.com's most recent rankings of the best 4K TVs available are dominated by the OLED category, with the top eight models and nine of the top ten all featuring OLED technology. LG alone takes the top five spots, with the E9 OLED TV coming in at number one.

In addition to TVs, OLED screens are also used on some of the newer generations of smartphones, including the iPhones from the last two years.

But there's one potential issue that's a worry for some OLED TV users: Burn-in.

What is burn-in? It's when certain areas of the screen on a TV or other monitor leave a visible mark on screen. Sometimes it's a channel logo, other times it's a sports scoreboard. It's sometimes permanent, but not always.

Burn-in is a not a new phenomenon. It used to happen with CRT TVs. And when the two major technologies used for TVs were LCD and plasma, it was mostly understood that plasma TVs had more of a burn-in problem than LCDs.

But now that OLED TVs are gaining share, concerns have been raised about burn-in with them as well. Even Samsung, which does not make OLED TVs, has resorted to "negative campaigning" about its rivals, advising consumers to "get a burn-in free QLED" TV from Samsung.

How worried should you be about burn-in on your OLED TV?

According to a CNET analysis published in December, burn-in absolutely exists with OLED TVs. However, most of what looks like burn-in is non-permanent image retention, and overall, it does not ever affect most users. It would likely affect them if they left their TVs on all the time, but that's not normal behavior for TV owners.

"Burn-in is something to be aware of, but not worry about," CNET wrote, adding that the overall quality of OLED models is worth the relatively small risk.

Many manufacturers have begun to take steps to allay fears about burn-in. One of the leading OLED TV manufacturers, LG, has a website about dealing with burn-in.

"With an LG OLED TV, any risk of burn-in or image retention have been addressed through the use of technology that not only helps protect against damage to the screen, but features self-healing properties so that any short-term image retention that may occur is quickly rectified," the LG site says. "It is rare for an average TV consumer to create an environment that could result in burn-in."

The website AllConnect offers some advice for avoiding burn-in on OLED models, such as lowering the screen brightness, using a screensaver and activating the sleep timer.