Omicron Variant Results in New Record for Number of Cases 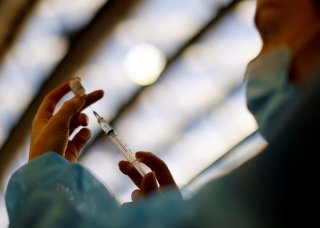 The Omicron variant has led to a new daily record in the number of COVID-19 cases.

According to Johns Hopkins figures cited by USA Today, 500,000 new cases announced on Monday, December 27, broke the previous record of 303,000 by a significant margin. USA Today noted that while the record figure likely includes some belatedly-included cases from the Christmas holiday, it also represents a huge surge.

A record 5.9 million cases worldwide were also announced in a one-week period. The previous record for cases in an individual week was 5.79 million in April 2021.

The news came as part of an eventful couple of days in the pandemic. The Center for Disease Control (CDC) announced that it was revising the figures from the previous week that showed 73 percent of cases were the Omicron variant, stating that the number was actually 22.5 percent. Omicron cases have made up 58.6 percent of new cases in the most recent week.

The CDC website also now says that those who are fully vaccinated can likely spread the variant.

“The Omicron variant likely will spread more easily than the original SARS-CoV-2 virus and how easily Omicron spreads compared to Delta remains unknown,” the website says. “CDC expects that anyone with Omicron infection can spread the virus to others, even if they are vaccinated or don’t have symptoms.”

The CDC continues to encourage the population to receive vaccines and boosters.

Fauci Clashes with Administration over Mandates

Earlier this week, Dr. Anthony Fauci said during a television interview that the United States should consider imposing a vaccine mandate for those wishing to fly. The Biden administration has signaled that it is not prepared to impose one, with an administration official telling the Associated Press that such a mandate “could trigger a host of logistical and legal concerns.”

The CDC currently encourages, but does not mandate, that fliers take and pass a COVID test one to three days before flying.

“When you make vaccination a requirement, that’s another incentive to get more people vaccinated,” Fauci said earlier this week in an interview on MSNBC. “If you want to do that with domestic flights, I think that’s something that seriously should be considered.”

It appears to be a disagreement between Fauci and Biden administration, although not nearly as bitter as ones Fauci had with former President Donald Trump.

The administration did announce that it is lifting existing travel restrictions on several countries in southern Africa beginning on December 31. Those had been put in place just after Thanksgiving, after the Omicron variant was first reported in South Africa.