One Change Could Get the U.S. Navy's New Aircraft Carrier Program Back on Track 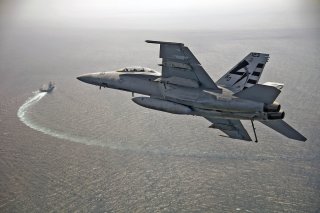 It hasn't exactly been smooth sailing for the U.S. Navy’s aircraft carriers in recent months—and the problem-prone USS Gerald R. Ford (CVN 78) had another shakeup this week. Capt. Ron Rutan, who served as the ship’s program manager, has been reassigned to the Naval Sea Systems Command (NAVSEA) staff while Capt. Brian Metcalf has been named as his replacement.

Defense News reported that the change was made to get “fresh eyes” on the efforts to get the newest naval carrier through its post-delivery test and trial period, which will continue for the rest of this year before the warship heads into full-ship shock trials. In those trials live explosives will be set off next to the carrier to see how it handles battle damage.

However, there is no specific incident or causal factor that led Navy Acquisition Chief James Geurts’s decision to remove Rutan from the office—rather it was reflective of the program’s overall performance.

“Readiness of USS Gerald R. Ford (CVN-78) is the Navy’s top priority, and the progress the team made during the Post Shakedown Availability (PSA) met requirements while the subsequent eight months of CVN 78’s post-delivery test and trials (PDT&T) period has been impressively ahead of plan,” NAVSEA spokesman Rory O'Connor told USNI News. “Even in the face of a global pandemic, the team has kept a lightning pace, and we will continue to do so, for our Navy and our nation, until USS Gerald R. Ford completes her post-delivery obligations and is fully available and ready for tasking by the Fleet.”

Since its post-delivery test and trial period that began last fall, the program has seen more than its fair share of issues. More than two years after the commissioning of CVN 78 the carrier didn't have working weapons elevators and continued to face challenges with its propulsion system.

Some of those issues have been resolved. Back in April, the carrier finished tests of its combat systems and that followed the Flight Deck Certification (FDC) and Carrier Air Traffic Control (CATCC) Certification—that included preparing to launch “cat” and recover “trap” aircraft from the Carrier Air Wing Eight (CVW 8).

However, some problems have still remained—many dating back to when the construction of the ship began in 2005. As Defense News noted, much of the trouble is related to trying to pack too much into a single new hull. This included at least twenty-three new technologies that included a complete redesign of the systems used to arm, launch and recovery aircraft.

While USS Gerald R. Ford is also the lead ship in a new class, it has a problem that is similar to one that has impacted the USS George H. W. Bush (CVN 77), the newest Nimitz-class aircraft carrier. Both ships have toilets that clog frequently and unclogging the system can cost upwards of $400,000.

Despite these problems, USS Gerald R. Ford is being readied for its next set of trails.

The ship is named after the 38th President of the United States and since her commissioning in 2017 she is the largest aircraft carrier in service and the largest warship ever constructed in terms of displacement. Her sister ship, USS John F. Kennedy (CVN-79) is being fitted out and is scheduled to replace the USS Nimitz (CVN-68), while USS Enterprise (CVN-80) is currently under construction with a planned commissioning for 2027 and will then replace USS Dwight D. Eisenhower (CVN-69).