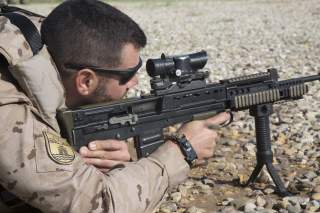 Rumsfeld had infamously joked in 2004 that "you go to war with the army you have, not the army you might want or wish to have at a later time." From what the report indicates, perhaps he should have waited.

The Army's massive history of the U.S. military intervention in Iraq, comprised of two massive volumes and 30,000 pages of declassified documents published by the U.S. Army War College, is a stunning survey of the service's missteps following the 2003 invasion.

But it also provides a clear-eyed look not just at the course of the invasion, but the state of the U.S. political and military apparatus in the run-up to the September 11th attacks — and the hubris that tilted the Pentagon towards invasion.

Initiated by then-Army Chief of Staff Gen. Ray Odierno in 2013, the Iraq report's assessment of the pre-9/11 Army isn't totally surprising: with the end of the Cold War and a lopsided victory in Iraq during the Gulf War. the Army contracted in every aspect of its branch. Indeed, the Army's active duty strength shrank from 770,000 in 1989 to 510,000 in 1995 to 490,000 in 2002, a major drop in the sheer manpower that defined the Pentagon's premier fighting force.

Despite this, the Army continued to kick ass and take names after the Gulf War, deploying soldiers on contingency operations in Somalia, Haiti, and the Balkans.

But was these wins with a protracted force emboldened Pentagon decision-makers to the ease of victory by providing a boost for the so-called "revolution in military affairs" (RMA) that emphasized technological solutions to future warfare challenges rather than a return to Cold War-era force levels — an operating principle which ended up lulling the Army into a false sense of security, an organizational belief that the service could simply do more with less and kill its way out of any problem.

This is all captured in a single paragraph:

On the eve of the 2003 invasion of Iraq, the U.S. Army was much decreased from its Cold War size, while sustaining a high tempo of stability operations around the world. Defense thinkers concluded that Operation DESERT STORM marked a revolution in the nature of war, after which technology would enable the U.S. military to defeat any enemy with a relatively small force. The U.S. military of the 1990s, writ large, had developed a low tolerance both for casualties and for mistakes by tactical commanders. As it reduced its combat formations, the Army had outsourced much of its logistical services, including for contingency operations, on which it had become accustomed to deploying in a somewhat non-expeditionary posture with large base camps and amenities. As its involvement in stability operations mounted, the Army found its real-world activities at odds with its doctrinal emphases, including the previous assumption that [Operations Other Than War] were a lesser included capability for forces that were trained and ready for major combat operations. There also lingered in many Army quarters the sense that OOTW were extraneous, if not detrimental, to the Army's core mission. Throughout the 1990s, the Army had evolved from a static, Europe-focused force to one accustomed to deploying in contingency operations worldwide, though it continued to judge its commanders mainly by their success in high-intensity conflict war games and training exercises—even as their units became increasingly involved in low-intensity conflicts in the real world. In Haiti, Bosnia, and Kosovo, the U.S. military had acquired the assumption that the cessation of hostilities in a conflict would lead naturally to a peacekeeping-type mission by an international force. After 9/11, many defense leaders believed the brief campaign in Afghanistan seemed to validate the RMA, and that meant that even more could be done with fewer U.S. forces.

Translation: The Army expected a repeat of the one-and-done victories abroad in the 1990s, only to find itself organizationally ill-equipped for a prolonged campaign against disparate terror groups there, laboring under the belief that it could do less with more. And while the relatively peaceful period between the Cold War and the post-9/11 Global War on Terror gave rise to RMA within Pentagon circles, plenty of the blame for its spread of can be placed at the feet of Defense Secretary Donald Rumsfeld, who pushed the doctrine upon his arrival at the Pentagon in 2001.

"The apparent success of a tiny footprint of U.S. forces—mainly special operations forces—working with indigenous Afghan fighters from the Northern Alliance appeared to some in the U.S. national security apparatus, especially those who already espoused RMA, to point the way toward a similar method by which Saddam might be toppled with far less cost and trouble than the Clinton administration or CENTCOM's Desert Crossing had assumed," the report noted.

"In other words, the experience of the 9/11 attacks and the weeks that followed them indicated to some U.S. leaders that the removal of Saddam was not only an immediate necessity, but also an easy prospect"

Rumsfeld had infamously joked in 2004 that "you go to war with the army you have, not the army you might want or wish to have at a later time." From what the report indicates, perhaps he should have waited.