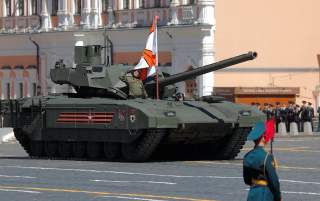 If one looks at the most popular tank designs in the world, two clear design philosophies emerge. The first is seen in the Abrams and Leopard 2 which store the ammunition in the turret bustle in a protected bunker where the force of the explosion is directed away from the crew if it’s hit. The second philosophy is shown by the Russian T-series tanks which primarily store the ammunition around and under the turret in a carousel so that the tank's autoloader can load it.

The use of an autoloader in T-series tanks allows for the size of a tank’s crew to be reduced to three (for better or for worse) and more weight to be devoted to armor due to the reduced internal volume that needs to be armored. However, the placement of the ammo around the turret in the carousel can result in a dangerous situation if the tank is hit and the ammo is struck.

Moreover, some tanks use a bustle autoloader which can utilize the best aspects of each philosophy. But why is this design relatively uncommon? Will we see it become more popular in the future?

The Leclerc’s autoloader loads rounds from a twenty-two-round cassette in the turret bustle. An armored bulkhead separates the ammunition from the crew compartment. Rounds are passed through a tiny hole, which only opens momentarily during the loading cycle, as seen in this video. Blowout panels surround the twenty-two round cassette. The K2, Type 90 and Type 10 also are very similar to the Leclerc in the placement and design of the autoloader, with minor changes to how the round is transferred between the armored bustle stowage and the gun breech.

The Soviets even experimented with a hybrid bustle/carousel system in some designs. In this diagram, we can see the non-explosive sabots being arranged in a carousel, with the explosive propellant stored in a bustle with blowout panels. The advantage of this design—as opposed to the full bustle autoloaders above—is the dimensions of the turret are reduced as the entire tank round does not need to be stored in the bustle.

This leads into one of the major disadvantages of a bustle autoloader. While it is a relatively safe place to store ammunition, a large ammunition bustle limits the safe maneuver angles of the turret. Additionally, a long bustle increases the size of the ammunition supply as a target when the turret rotates.

However, this was not adopted by the Armata, which also takes a different approach. It retains use of a carousel autoloader but separates the crew from the ammunition and places them in a heavily armored capsule in the hull. This allows the Armata to retain the advantage of making ammunition a smaller target while increasing crew safety.

But perhaps the biggest reason why the bustle autoloader is not very popular in the west is that it doctrinally doesn’t work with the Leopard and Abrams. Both tanks are designed around a four-person crew with the fourth being a loader. American and German doctrine support the use of a fourth man to make maintenance and field repair tasks easier. In practice, human loaders in the Leopard and Abrams have been able to keep up with carousel and bustle autoloaders.

However, if the tank gun becomes bigger, up to a theoretical 140 millimeter or 152 millimeter, a human loader starts to lag behind machines. If tanks ever upgunned to these calibers, we are likely to see bustle autoloaders implemented on future versions of the Abrams.

The concept has been tried before, with various designs including two massive eighteen-round revolving cassettes in the Abrams’s turret bustle in a system called FASTDRAW. This design would likely retain the fourth man, although it still keeps the drawback of reducing the safe maneuver angles of the tank, although this disadvantage wouldn't be much more than a regular Abrams.